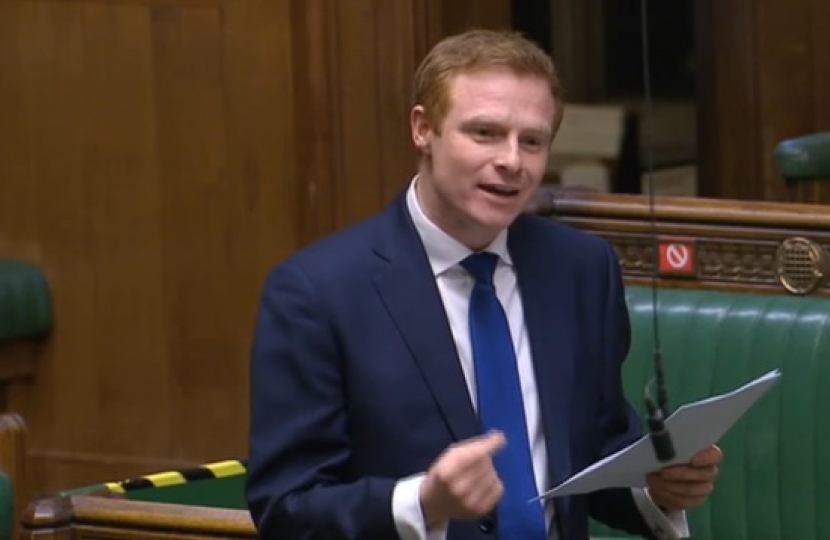 Keighley and Ilkley MP Robbie Moore secured an adjournment debate in the House of Commons to criticise the decision made by the Environment Agency and Bradford Council over the Aire Valley Incinerator. The debate, which was held on Wednesday 24 March, was led by Robbie. As per House protocol, a Government Minister was on hand to provide a response.

In his speech, Robbie focused on highlighting the many failures of both the Environment Agency, who were responsible for granting the environmental permit for the incinerator, as well as Bradford Council who granted planning permission for the incinerator back in 2017. Robbie also praised the work of the Aire Valley Against Incineration campaign group who have for a number of years led the campaign against the incinerator.

During his speech Robbie said: “This is an incinerator that is to be built at the bottom of a valley in close proximity to schools, residential care homes, playing fields, people’s homes—spaces where children grow up and play. Yet despite that, and a huge number of other factors which I will go into, both the Environment Agency and Bradford Council, as the local planning authority, have deemed the construction and operation of the incinerator to be suitable and fit for our environment.

This has been a long-running issue. The environmental permit for the incinerator was granted last December, but the campaign against the project began way back in 2013. In October of that year, the very first planning application for the incinerator was made to Bradford Council. Four years and three applications later, the Labour-run and controlled Bradford Council granted planning permission. However, throughout this whole period, many residents, including my hon. Friend the Member for Shipley (Philip Davies), questioned time and again whether the planning applications were scrutinised by Bradford Council in enough detail.”

During the debate, Robbie took an intervention from the Conservative MP for North West Durham, Richard Holden, who is facing a similar situation in his local area. In his intervention, Mr Holden claimed that “Durham County Council, has done a deal with a local developer to not put forward planning permission until after the local elections. Is not that exactly the sort of issue that we are facing with these proposals when they come forward: shady backroom deals, often dragged out for longer in order to avoid democratic scrutiny?” Robbie responded that he was “not surprised” whilst finding it an “absolute disgrace to hear”.

On concluding his speech, a response was provided by the Environment Minister Rebecca Pow MP, who said: “I expect nothing less from my hon. Friend the Member for Keighley (Robbie Moore), because he has spoken to me many times about this issue, and I know that he has very much wanted to bring it to our attention in the Chamber. He has certainly done that in respect of the proposal for an incinerator in the Aire valley in his constituency, which would deal with 148,000 tonnes of commercial, industrial and municipal waste and is expected to be operational in a few years’ time.

“Before going into detail on the particular proposal, I start by saying that my views have not changed at all. I have spoken about this many times in other debates, as has my hon. Friend, and the Government’s attention remains firmly on exactly what he talked about towards the end of his eloquent speech. Our intention is to focus on reducing, recycling, reusing and, indeed, cutting down on all waste and moving to a circular economy. This is absolutely the direction of travel, and we have targets in place to enable us to do that now.”