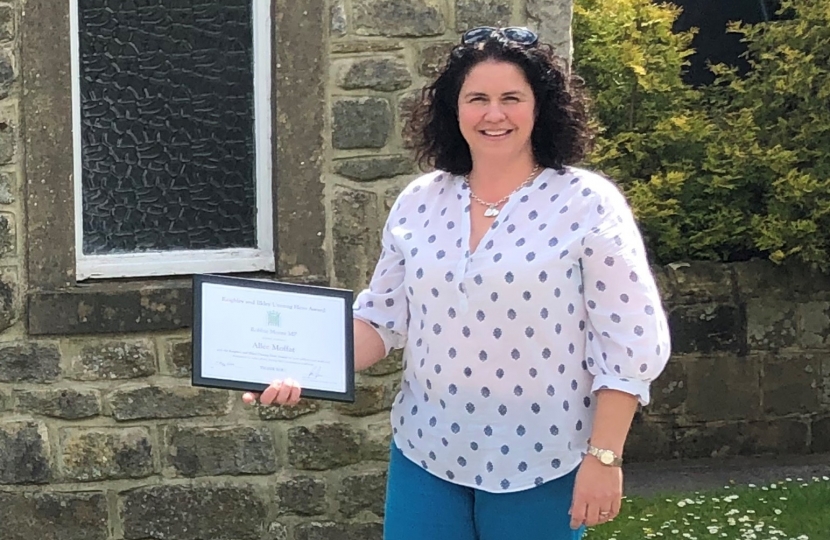 Addingham resident Alice Moffat has been announced as Keighley and Ilkley’s first unsung hero after 36 nominations were received from local residents in the first 48 hours after nominations were called for. The award, launched by Keighley and Ilkley MP Robbie Moore is designed to honour those across our area who are going out of their way during the Coronavirus pandemic to help others, but whose efforts would usually go unrecognised.

Alice, whose day job is in the sports events industry had her workload significantly reduced following the lockdown restrictions, has thrown herself into helping her local community get through this tough time. Despite already volunteering for the Yorkshire Ambulance as a first responder, Alice has increased her number of days in which she is on call to help the service, and has also got involved in delivering prescriptions to Addingham residents who are in self-isolation or are unable to get out to visit the local pharmacy.

Alice is also shopping for old and vulnerable residents who are in self-isolation, making several trips to the local supermarket per week as well as sewing a supply of PPE face masks and headbands for our brave frontline NHS workers.

Mr Moore said: “We received many extraordinary applications and it was a tough decision. Every single nomination was worthy of the Unsung Hero Award. However only one person could be selected for this Friday. Alice’s selfless determination to help in not just one but several different ways made her a worthy winner of this week’s Keighley and Ilkley Unsung Hero Award. Alice is an inspiration to us all and I hope her story motivates others to get out there and help the most vulnerable during these challenging times.”

Every Friday, Mr Moore will be announcing another Unsung Hero from across Keighley and Ilkley who is going above and beyond to help others during these tough times. Nominations for the Unsung Hero Award can be made at https://www.robbiemoore.org.uk/unsung-hero-awards.

I am determined Keighley comes out fighting fit

As we move into the second stage of our response to this terrible pandemic, we need to ensure that focus is not just on saving lives and protecting our NHS, but also on saving livelihoods.