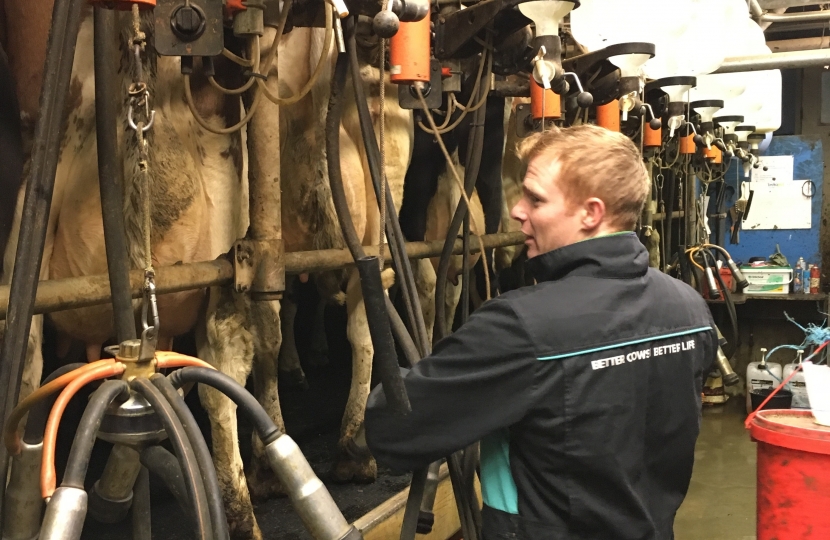 This week I spoke in the House of Commons in relation to the Agriculture Bill in which the House considered the Lords Amendments. I focused my contribution on the Lords Amendment 16 which required food imports to meet UK domestic standards for animal health and welfare, plant heath and environmental protection standards. After giving much thought to this proposed amendment, I concluded that whilst the aspirations of the clause were entirely plausible, the amendment was not workable and would not be enforceable in law. The amendment would also have undesired consequences on the many food imports which come into this country which we simply can not produce here for reasons of climate or environmental conditions. I therefore could not support the Lords amendment.

I rise to speak in this debate as farming and the future success of our agricultural industry is a subject which I am incredibly passionate about. Indeed, before entering this place, my whole life has been involved directly within the farming sector – and may I use this opportunity to draw the House to my register of Members interests.

Now, it is my view that for far too long our agricultural industry and the entrepreneurial spirit which the sector undoubtedly encompasses has been restrained and stifled by the workings of the Common Agricultural Policy.

If we are being honest with ourselves, we have stood by with our hands tied through the CAP and watched our agricultural industry become less competitive, through ill thought through subsidy schemes that have impeded productivity, stifled innovation, created false ceilings land rents, and failed to protect the environment as much as we could have.

And let me be clear - this is through no fault of the farmer – but the system in which they have been constrained by.

Repeatedly, under CAP, we have subjected our farmers to one poorly designed subsidy scheme after another – with far too much complexity and red tape.

Change is required – and we now have that opportunity before us.

This Bill goes some way to shaking up the system and achieving this – which is good news.

I still do however have concerns around the speed in which the ELM scheme is being developed, and despite the reassurance of the transition period – farming businesses need clarity and certainly now – and I would therefore urge my RHF the farming minster to significantly ramp up their development.

So, I would like to use the majority of my time to talk about the Lords Amendment 16 which requires food imports to meet domestic standards.

This of course, and quite rightly has received much attention – and I have given this immense thought, as I want to ensure our domestic agricultural industry thrives and is truly sustainable long into the future.

But as we look to adopt new legislation – it is vital that we scrutinise the detail and the anticipated consequences.

So, let’s be clear about the current position - as I do believe that there has been much unnecessary scaremongering.

The UK’s food standards, for both domestic production and imports, are overseen the by the Food Standards Agency. An independent body which will, going forward continue to ensure that all food imports comply with the UK’s high safety standards.

Decisions on these standards are totally separate from any trade agreement, and indeed this Bill – and therefore this Bill does not result in a lowering of food safety standards.

But of course, the amendment goes much further and obligates that any agri environmental food import must have been produced and processed under standards which are equivalent to the UK.

So, we must ask ourselves – whilst the intentions are entirely admirable and correct – in reality, what will the consequences be for things like the supply of food currently being imported - like the vast amounts of tea imported from Kenya, bananas from the Dominican Republic or coffee from Vietnam.

Take environmental standards for example - If Vietnam, and other developing countries, such as Ghana and Indonesia which export coffee beans to the UK were expected to provide evidence that they met UK carbon emission targets, I can see that the UK retail and hospitality sector will be dramatically impacted – as I suspect such countries would not be able to meet such requirements.

But equally, it wouldn’t make sense for the UK to require trading partners with certain climates or environmental conditions which are very different to here in the UK to meet our specifications – such as the UK’s requirements on Nitrate Vulnerable Zones, which are specifically adapted to UK conditions.

It is this level of detail which must be explored and considered at this stage, as to whether this amendment through a domestic piece of legislation is actually practical to enforce abroad and workable in law.

And let’s be honest, it will be extremely unlikely that trading partners would agree to all requirements which this amendment seeks; in some cases, it might not even be possible for them to do so.

Now, I know that for a UK farmer watching this debate and listening to my comments – they will be thinking well, by excluding this amendment – how does this benefit me?

My view is that this amendment hampers our agri food sectors ability to grow, expand and met new export opportunities which will come from our country setting out on the world stage  - and negotiating new trade deals – and we should be bold and opportunistic about that for our UK farming sector.

But of course, it is not all about export – what about the UK domestic market?

And to provide reassurance to UK farmers – the existing protections which we already have, will remain.

Food coming into this country will be required to meet existing import requirements as the EU Withdrawal Act will transfer all existing EU food safety provisions onto the UK statute book.

These import standards include a ban on using artificial growth hormones in domestic and imported products and set out that no products, other than potable water, are approved to decontaminate poultry carcasses.

So, for those organisations and individuals unnecessarily spreading fear, it is currently illegal to import chlorinated chicken.

We have heard in this place from the despatch box explicit reassurance from the Secretary of State for International Trade that we will not lower our food import standards, and likewise from my RHF on the front bench - BUT - I look forward to making sure that such assurances are upheld.

I do believe much stronger lableing is required and I look forward to exploring and working on that, and likewise it is incredibly frustrating that the Lords Amendment 18 is not being debated which would have looked to beef up the Trade and Agriculture Commission, giving it much more power and influence to scrutinise new trade agreements before they are ratified to report and make recommendations to parliament.

In concluding, domestic policy is not the correct vehicle for implementing these aims due to their unintended consequences. Trade deals themselves would be far more appropriate as they can be tailored specially to meet the UK’s best interest in protecting our domestic market whilst opening up export opportunities.

I do believe much stronger labelling is required and I look forward to exploring and working on that, and likewise it is incredibly frustrating that the Lords Amendment 18 is not being debated which would have looked to beef up the Trade and Agriculture Commission, giving it much more power and influence to scrutinise new trade agreements before they are ratified to report and make recommendations to parliament.