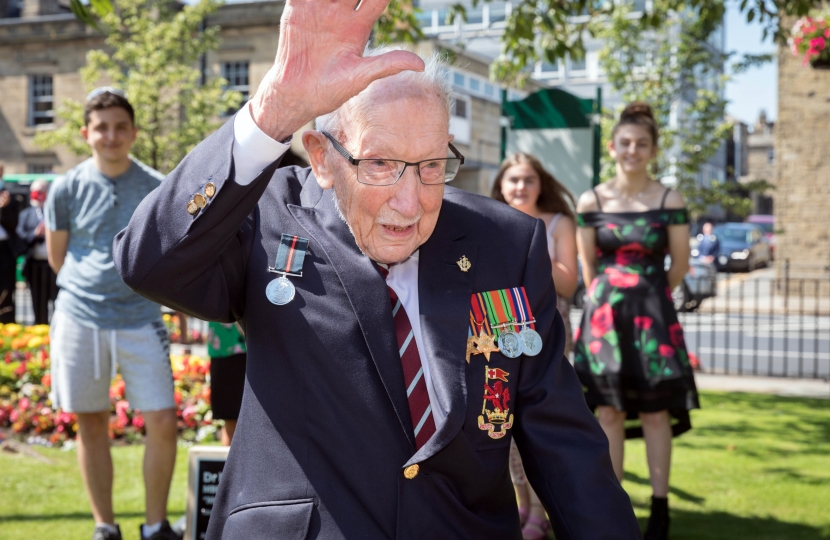 It’s just over a year since the late Captain Sir Tom Moore finished his world-famous 100 laps around his garden and his family are inviting Keighley to join the world to celebrate Captain Tom’s generosity of spirit, the hope and joy he brought to millions and his sense of fun by taking part in a new fundraising initiative over what would have been his 101st birthday weekend.

The Captain Tom 100 invites everyone to dream up a challenge based around the number 100 and complete it anytime and anywhere over Captain Tom’s birthday weekend (Friday 30 April to Bank Holiday Monday 3 May) to raise funds or donate to The Captain Tom Foundation or another charity of their choice.

Everyone is encouraged to join in the Captain Tom 100 and “Do it Your Way”; whether it’s walking 100 steps. running 100 metres, baking 100 cakes, or telling 100 people “Tomorrow will be a good day” and it’s already caught the imagination of Keighley.  Both the Town Mayor and MP Robbie Moore have pledged their support. Town Mayor Cllr Peter Corkindale will be walking 100 times around the Town Hall Square on Friday 30 April, rather fitting seeing as it’s the location of the cenotaph which was built by Captain Tom’s grandfather and Robbie Moore MP has pledged to run 10 x 10km runs over the next 10 weeks.

Both will be raising money for local charities in Keighley and are encouraging others to follow suit – choosing their Captain Tom 100 challenge, then fundraising or donating to The Captain Tom Foundation or another charity of their choice as well as sharing their 100 on social media, using #CaptainTom100. You can find out more at www.captaintom100.com.

The Captain Tom Foundation has also supported the work of the Keighley-based Captain Sir Tom Moore Memorial Commission who recently commissioned a survey in the town to see how best to commemorate the life and achievements of Captain Tom – who was born and raised in the town. The commission is headed by local MP Robbie Moore who has also launched a poster competition for local children to display in his office window to commemorate Captain Tom’s birthday and in addition he and the Council hope that the wider community will get involved with this very special initiative, Captain Tom 100,  introduced by the family of Captain Tom who have such close ties with the town of Keighley

Captain Tom’s daughter, Hannah Ingram-Moore, said: “We are so grateful for the incredible support we have received since my father started his record-breaking fundraising walk and that his message of hope was shared with the world. Captain Tom was very proud to be able to leave behind the growing legacy of his Foundation and the Captain Tom 100 feels like the perfect way to celebrate the hope and joy we know he inspired in so many.  He was also deeply proud of his Keighley heritage and would have loved the idea that Keighley were fully involved and that together we would ensure that ‘Tomorrow will be a good day’. We look forward to celebrating with you and seeing how you do the Captain Tom 100 – your way.”

Chair of the Keighley Captain Sir Tom Moore Memorial Commission, Robbie Moore MP, said: “The commission and the survey has been a resounding success and I look forward to presenting the findings shortly. I am honoured that The Captain Tom Foundation, which was co-founded by Captain Sir Tom and his daughter Hannah Ingram-Moore, has supported the aims and objectives of the commission. It is vital that any memorial – whether permanent or annual – has the support of Captain Tom’s family.

“I also look forward to displaying the many posters which I hope to receive from the many school children across our area. Entries are still open and should be sent to me at my Keighley office no later than 27 April.  It would be rather fitting if I could receive 100 posters ahead of the Captain Tom 100.

“For the Captain Tom 100 challenge, I will be running 100km, split over ten 10km runs over ten weeks. The first of these will take place on 30 April. The money which I raise will go to charities across the Keighley and Ilkley constituency.”

Town Mayor Cllr Peter Corkindale said: "A year ago Captain Tom Moore inspired the nation by walking 100 laps around his garden. On what would have been his 101st birthday I’d encourage everyone to join me in taking up the 100 challenge and why not raise money for one of the many wonderful local charities right here in Keighley.”

Captain Tom 100 is being organised by The Captain Tom Foundation with London Marathon Events and supported by the Mass Participation Sports Organisers (MSO), adam&eveDDB, LiveWire Sport and Studio Republic (all working pro bono).