Cleaning Up Our Rivers 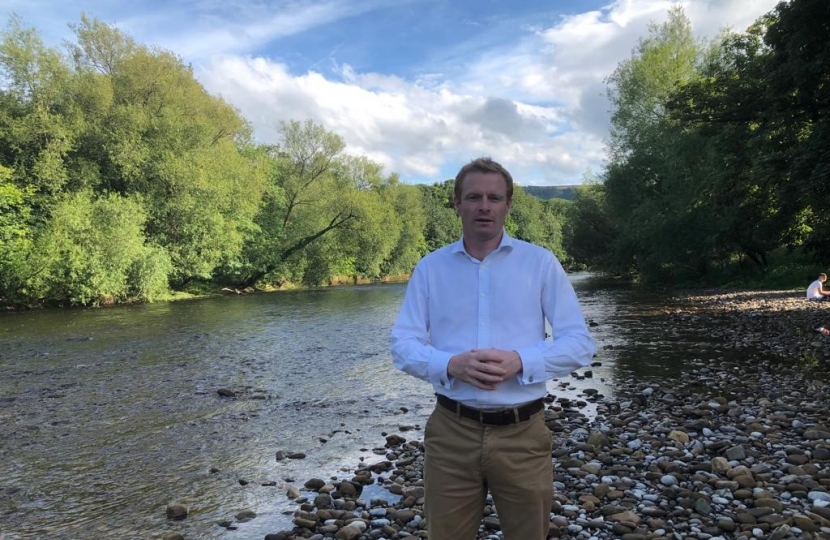 As many people will know, I care passionate about improving the environment, and cleaning up our rivers and streams. That’s why I am very pleased to have been so involved with the Environment Bill which is currently working its way through both Houses of Parliament.

This really is a vitally important piece of legislation and once approved, it with govern all aspects of environmental improvement measures and will help shape a much better environment for us all.

Prior to becoming your MP, I worked for 12 years or so as a rural practice surveyor getting involved and advising on all sorts of agri-environmental stewardship agreements, moorland restoration projects, water quality improvement schemes and worked with the likes of Natural England and the Environment Agency to implement positive measures that would have huge environmental benefit. For the same period, I was also heavily involved in my family’s plastic recycling business and our family farm, where we use regenerative farming techniques, have recently planted many trees and installed solar panels to provide electricity.

I outline this only to illustrate that protecting the environment is something which I care deeply about. I don’t just talk about this topic but get engaged to physically do something about improving our environment as well.

Therefore, as a keen conservationist and as someone who has been deeply engrained with all aspects of improving the environment prior to becoming your MP, and now in that role as a legislator, I am pleased to have personally helped improve the Environment Bill and look forward to it becoming law.

Last Wednesday, the Environment Bill returned to the House of Commons and all Members of Parliament were asked to consider several Lords Amendments, including one relating to sewage discharge and storm overflows.

I wholehearted share many people’s concerns about the use of storm overflows, and how their use can result in raw sewage being released directly into the river system. Indeed, in Ilkley, we see this happen far too often and, on many occasions, I know that raw sewage is released into the Wharfe even when storm tanks are empty, or when Yorkshire Water’s underground pipework apparatus bursts.

This simply isn’t good enough and must be stopped.

That is why I am determined to ensure that measures are put in place to stop this practice. As you may know, I have been working hard with the local campaign group in Ilkley, the Ilkley Clean River Group, amongst others, to put pressure on Yorkshire Water to clean up their act. I want to see them properly invest in infrastructure improvements and to put a plan in place which can be made publicly available for scrutiny which clearly demonstrates how they as a utility company will stop discharging raw sewage into our river system.

I am strongly opposed to storm overflows containing untreated sewerage discharging into rivers. It is disgusting and environmentally damaging and needs to end.

That is why I am glad the Government is introducing a comprehensive package of measures to eliminate the discharge of untreated sewerage into rivers, and I was delighted to vote for them as part of the Environment Bill. I detail below how we are doing that.

However, I will begin by commenting on Lords’ Amendment 45 to the Environment Bill, which was voted on this week, and about which a number of constituents have contacted me.

The Government has inserted a range of amendments to the Environment Bill to address the concerns I, and other MPs raised about storm overflows. I was pleased to vote in support of Amendment 45, which passed in the House of Commons by 265 votes, to 202.

However, a section of the amendment, tabled by the Duke of Wellington was removed, and concerns have been raised about that.

This section sought to place a new duty on sewerage undertakers in England and Wales to demonstrate progressive reductions in the harm caused by discharges of untreated sewage.

This sounds like a good idea, and indeed is something I support in principle. However, the problem was that the Duke of Wellington’s amendment came with no plan as to how this can be delivered and no impact assessment whatsoever.

Some might argue that a plan is not essential, that one can be formulated afterwards. I would be sympathetic to this point of view if we were talking about a simple, inexpensive endeavour. But in eliminating storm overflows, we are talking about transforming a system which has operated since the Victorian era.

The practical problem is that across the UK there is just one system of pipes that takes both rainwater and sewerage from homes, rather than separate systems for rainwater and for sewerage. When there are storms, so much rainwater enters the sewerage system that it cannot be contained and needs to flow somewhere. Preventing the discharge of untreated sewerage during storms is a major change to infrastructure in almost every town and village in the country. Some mitigations such as storm tanks can reduce discharges but don’t usually eliminate them. We have witnessed this first hand in Ilkley.

The preliminary cost of this national infrastructure change is estimated to be up to of £650 billion. To put this figure in perspective, £650 billion is significantly more than what has been spent combatting the Coronavirus pandemic. It would bankrupt most water companies unless consumers or taxpayers contribute. The cost work estimates out at approximately £20,000 per household.

The Government’s view was that it would have been irresponsible on the taxpayer to have inserted this section in the Bill given that it was not backed by a detailed plan and thorough impact assessment. It would have been the equivalent of signing a blank check on behalf of billpayers.

Stopping sewerage discharge into rivers is so complex that in previous decades, no government (Conservative, Labour or Coalition) has tackled it.

But now we are.

I was therefore very pleased to support the other amendments to the Environment Bill relating to storm overflows (including the rest of Amendment 45).

This is absolutely essential, as it will provide Parliament and the public with up-front, clear and comprehensive information on the cost and impact of eliminating storm overflows. Between the Government plan on storm overflows and the new elimination report, we will fully understand precisely how we can best tackle storm overflows.

So while setting out lofty aspirations is all well and good, what we really need to do is the long, detailed, practical work required to understand how we can deliver on these ambitions. It is not glamorous or headline-grabbing. But it is the effective action we need to deliver for local residents.

Please do not think that the Environment Bill only legislates for the production of plans on tackling storm overflows, however vital these no doubt are. I was pleased to support amendments to the Bill which take firm and immediate action to tackle storm overflows in the short-term. This includes:

All of these measures are informed by the work of the Storm Overflows Task Force, which the government established in August 2020 to bring together key stakeholders from the water industry, environmental NGOs, regulators, and Government in order to drive progress in reducing sewage discharges. The Taskforce has agreed a goal to eliminate harm from storm overflows.

I will continue to campaign hard to clean up our rivers, but this has to be done practically, with knowledge of the detail and not just using ‘headline’ politics without consideration of how it will be done.

The government’s 25 Year Environment Plan sets out its commitment to ensuring the provision of clean and plentiful water, through legally binding targets on water quality. Earlier this year, the government announced that Farmers will be given additional £17m in support to reduce water pollution.

The government has also commissioned the Environment Agency with a range of enforcement powers. Most recently, Southern Water were fined a record £90m, after pleading guilty to thousands of illegal discharges of sewage into rivers and coastal waters.

Between 2020 and 2025, water companies will invest £7.1 Billion on environmental improvements in England. Of this, £3.1 Billion will be invested in storm overflow improvements specifically.

I hope this information is helpful and reassures readers that any suggestion that MPs are not taking firm action on storm overflows is false. A majority of MPs including myself voted in favour of taking a range of immediate steps to address storm overflows, together with a legal duty on government to produce detailed and costed plans for reducing and eliminating storm overflows entirely.

Apologies for the length of this post - but detail is important - and I am conscious that over the weekend there has been a lot of miss information posted on social media that I ‘voted to allow sewage to be dumped in rivers’ and this simply is not the case.

With all the very best,