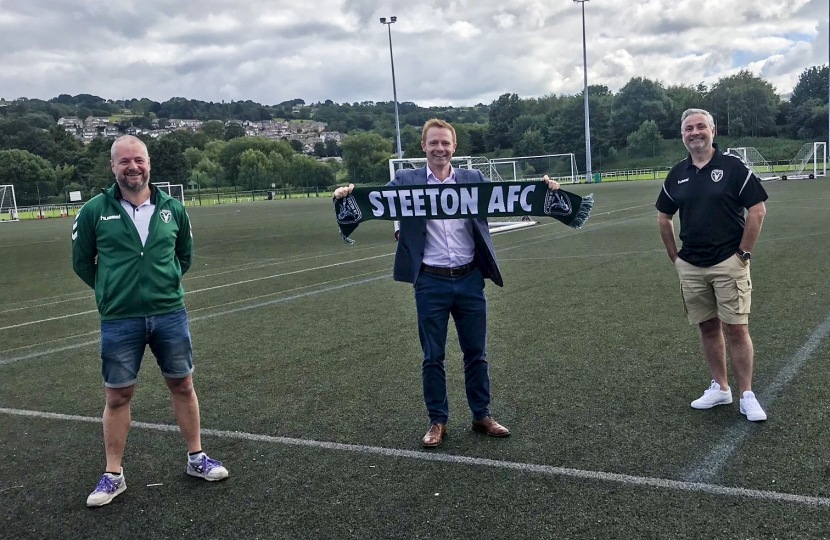 He visited Marley on Saturday to meet with members of the club’s committee and discuss progress on the new ground improvements. This includes the installation of a new 4G pitch, LED floodlights, a 100-seater stand, refreshments facilities and upgrades to the changing rooms.

Mr Moore said: “It was great to meet Steeton AFC at their new grounds at Marley to hear about their ambitious plans for the future. It is important that we get these grounds into shape before the football season restarts.”

The meeting was also an opportunity for Robbie and the committee to talk about ways in which the sports provision in Keighley could be improved for all ages.

He added: “The club has a clear vision on how they want to develop and nurture future footballing talent across our town and I am eager to see young people from across our area join sporting clubs such as Steeton AFC. The new grounds at Marley will make it easier for the team to do this and I look forward to seeing them they are finished.”

Steeton AFC Chairman Pete Jeffrey said: “It was great to meet Robbie down at Marley and I think we share a similar vision for developing sport in the town. The move to Marley is progressing as well as can be expected given the current situation and we’re grateful for the support of Bradford Council and the North West Counties League in helping us achieve our vision. The new facility will be a showpiece venue for the whole town.”

Mr Jeffrey said that discussions at the FA are underway regarding the start of the 20/21 non-league season but added a note of caution saying there were no confirmed start dates as yet.

“September has been mooted but this is far from set in stone. There are a lot of measures to put in place to ensure the safety of supporters, players and staff. We hope to have some clarity on this soon. Everyone involved in the club is excited to get back playing again.”