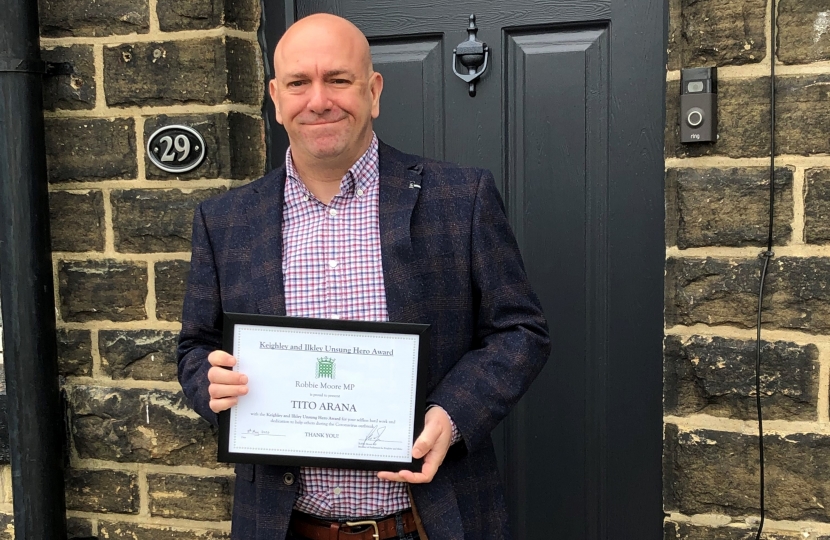 Cross Roads resident goes above and beyond to help his community during these difficult times by keeping spirits high. Tito Arana has been announced as Keighley and Ilkley’s next unsung hero after many nominations have been submitted for the award to Robbie Moore MP's office. The award is designed to honour those across our area who are going out of their way during the Coronavirus pandemic to help others, but whose efforts would usually go unrecognised.

Tito has gone that extra mile to help bring the community of Lees, Cross Roads and Bocking villages together. As many residents self isolate and are unable to get out and about to see friends and family, Tito has raised the spirits of the area by organising online quizzes, bingo events and race nights, whilst on many occasion dressed in disguise. Many residents throughout Cross Roads and the wider Worth Valley have been logging in online to take part. To keep residents busy throughout the lockdown period, Tito has also organised art, photography and even a 'Cross Roads Got Talent' competition to keep all entertained. Tito even made sure that certain individuals within the village who are self isolating were not forgotten on their birthday, by making sure they got a special mention.

As well as raising the spirts of the area during this difficult time, Tito has also been supplying key workers with face masks to help keep them safe.

Mr Moore said: “I have been inundated with nominations over the last week, and it is always a tough decision as everyone is doing so much to help others. However, only one person could be selected for this Friday. Tito received many nominations and it was very clear through the comments people made that Tito has gone out of his way to raise the spirts of his community. It is clear Tito really does care about the wellbeing of others, especially those living alone. Tito's energy and enthusiasm has shone through and he has worked tirelessly to make sure all of Cross Roads and Lees are supported and kept in touch, which is incredibly admirable during these difficult times.

Every Friday, Mr Moore will be announcing another Unsung Hero from across Keighley and Ilkley who is going above and beyond to help others during these tough times. Nominations for the Unsung Hero Award can be made at https://www.robbiemoore.org.uk/unsung-hero-awards.

I am determined Keighley comes out fighting fit

As we move into the second stage of our response to this terrible pandemic, we need to ensure that focus is not just on saving lives and protecting our NHS, but also on saving livelihoods.