Disgust at the state of Utley Cemetery 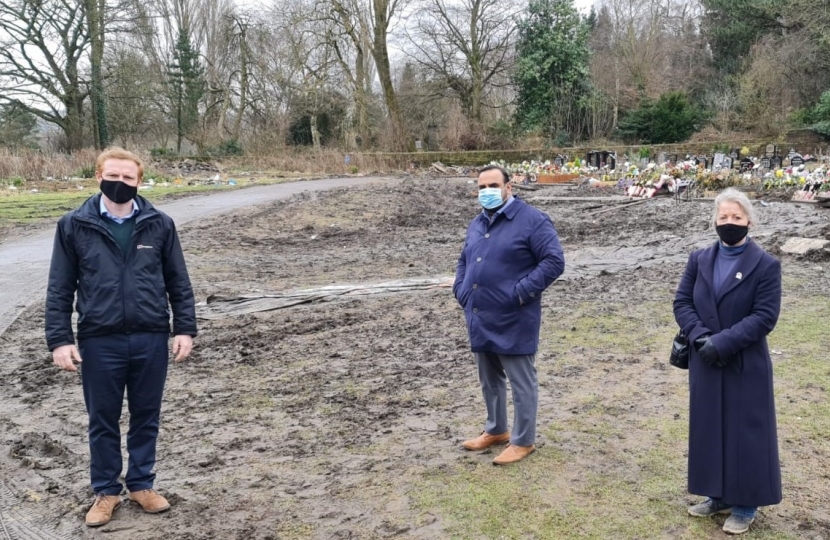 Local figures have denounced Bradford Council over their management of Utley Cemetery which has resulted in the cemetery looking like a “building site” with no respect shown to the families of the many Keighley residents who are buried there.

The cemetery, in particular the Muslim section of the cemetery, has been left in a state of disrepair and has caused outcry from local residents, family members and the Muslim community as a whole. Safety concerns have also been raised with the site making it impossible for mourners to get to graves without slipping on the hazardous surfaces. This news comes following the revelation last year when Bradford Council renovated the Sleeping Baby area of the cemetery with no consultation with the families, which left many memorials in a state of disrepair.

Commenting Robbie Moore said: “It is a disgrace how the cemetery has been left. Rubble has been stockpiled right next to graves and the ground conditions are appalling. I am angered that Bradford Council who own and manage the cemetery have allowed this sacred place to get into this appalling condition. It looks like a building site and just shows a complete lack of respect for the many families who have relatives in Utley Cemetery. This isn’t the first time I have raised this either. Last summer I wrote to Bradford Council at the disgraceful manner in which they had left the Sleeping Baby section of the cemetery. I have written to the Chief Executive of Bradford Council, Kersten England, demanding that this is sorted out immediately and that she does all in her power to put this right.”

Cllr Mohammed Nazam who originally brought this matter to the attention of Robbie Moore MP has said: “The Muslim Cemeteries in Utley and at Scholmoore are the worst ones I’ve seen in the region. Stones and soil are being left on the side of graves. Family members are unable to be at the side of their graves when their loved ones are being buried due to the Health and Safety risks. The walls of the graves are loose and when standing on them to close the grave the walls at times have given in resulting in the breeze blocks falling onto the coffins. Enough is Enough. Bradford council need to step in and sort this out. It is unfair on a community that is already grieving on the loss of so many lives. I wanted to bring this to the attention of the MP and the ward councillor my colleague Cllr Clare Abberton so we can push collectively for Bradford council to take the necessary and swift action that’s needed.”

Commenting on work going forward, Chair of Keighley Town Council’s Finance and Audit committee and ward member Cllr Clare Abberton said: “We were delighted that on last Monday evening, the Finance and Audit Committee of Keighley Town Council agreed the first lot of funding to tidy the area around the Baby Memorial in Utley Cemetery. We hope this will take place in the next month. Please have confidence that no personal memories or tributes will be removed or damaged. This is very much about the area around the graves, with only encroaching overgrown plants being removed from the graves themselves.

“This tidy will be carried out by professional gardeners, known and trusted by Keighley Town Council. We hope in doing this, that we can really see what needs to be done as a next step, which will likely be work where the tributes lie, but we want to make sure we can do this without causing any distress.”