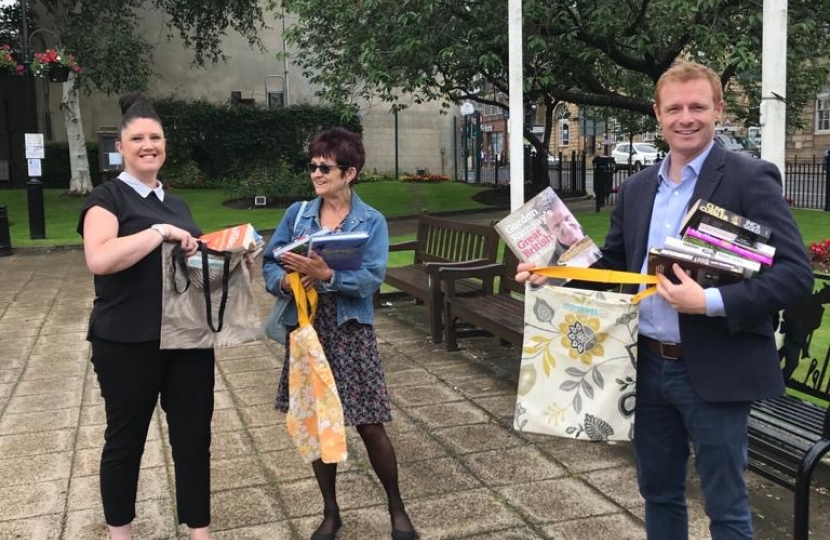 Emma, a Keighley resident who recently moved into the area from Bradford, has made an instant impact on her community by establishing a bookshare scheme on Facebook, which has become a great success. Books now dominate her flat and the group have expanded their community offering.

Emma and Co-Founder Kate Kilvington set up a Facebook group to share books when she moved to Keighley in April and was joined by Christine Robinson amongst several other helpers, who aided her grow the group through word of mouth and social media. The group, called ‘Keighley and Surrounding Area’s Books to Share’ has become its own community, whose members meet up, discuss books and go walking together.

As at 18 July the group has 350 members and almost 1000 books are held in Emma’s flat which have come from as far afield as Whitby and Hull. Six administrators of the group photograph and catalogue each book so that people can return, re-donate or keep the books they take from the scheme. They have also supplied books to local school's libraries.

Having quickly run out of carrier bags, they teamed up with Alison McLean of Plastic Free Keighley, who makes reusable cloth bags free for the group out of donated recyclable material.

The group have received the praise of local MP Robbie Moore who visited her at the weekend to witness the impact her work has had on residents in his constituency.

“Emma has made an instant impact in our community and it was a real pleasure to meet with her to see the work she’s doing.

“Young people, schools, elderly people and others who enjoy reading will all benefit from the scheme and I wish them all the success in the future. I will also do all I can to promote the group and support them so they can continue to grow.”

“When myself and Kate set up this group, we never imagined it would be the success it has become. I am so proud of how the group has developed and the members who make it what it is. I have never met a group of people who are just so passionate, not just about books, but helping each other and the wider community. I can't wait to see how the group develops in the future.”