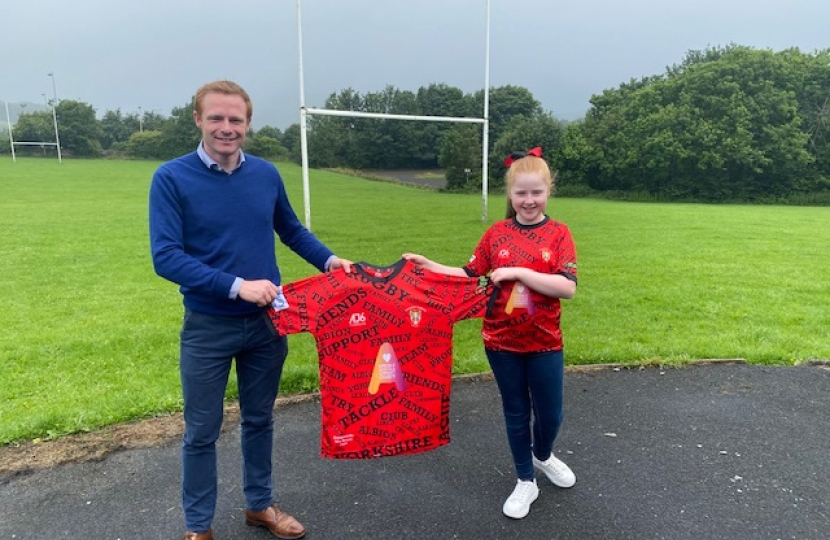 A 9 year old from Keighley, Mia Hewitt, has presented a jersey she designed for Keighley Albion RFC to local MP Robbie Moore. The shirts were produced following a competition to raise money for NHS Charities Together.

Keighley Albion invited young people involved with the club to design a jersey, which would go on to be produced for players and supporters to use, with all proceeds from sales of the jersey going to NHS Charities Together. The club raised over £600 from the sale of the jerseys.

The winner was decided by a panel of club members who concluded that 9 year old Mia’s design was the best. Mia, whose dad coaches for the team and whose brother plays for the under 14s Blacks was keen to design the jersey to show support for the NHS.

“I decided to make my shirt 10 minutes before the competition ended. I didn’t even think it would win. I am so happy that it did.

“It feels really good to see my design come to life. It has raised over £600 for people in Airedale Hospital. I am really proud of my design and everyone at Keighley Albion. I can’t wait to see Robbie wearing it.

“The design was really cool, so a huge well done must go to Mia for her effort. The competition was a great idea by the club and the proceeds will be gratefully received by staff at the Airedale Hospital.

“I was delighted to support the club and the staff at the Airedale by purchasing a jersey. I have brought it down to London with me so my colleagues in parliament can see the great work done by Mia and the club at the heart of our community.”