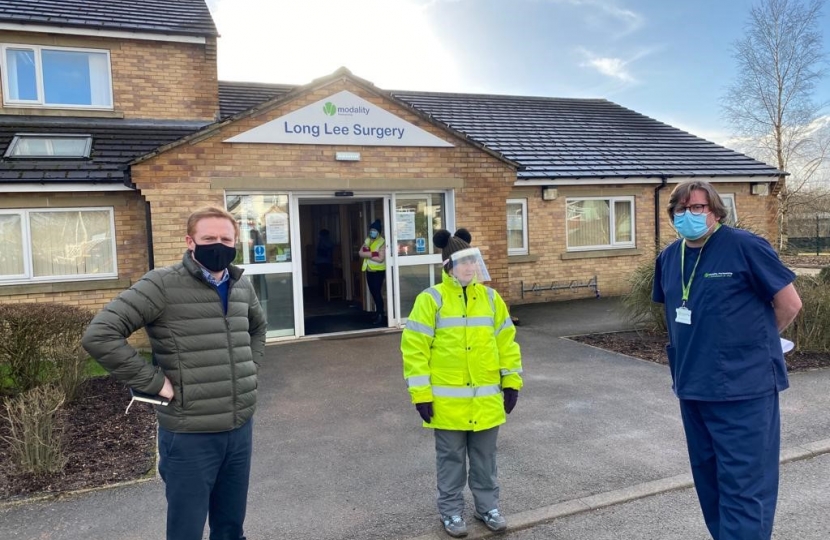 Robbie Moore has welcomed news that 59,007 people across Keighley and Ilkley have now received their first jab, as Britain’s historic vaccine rollout reaches two significant milestones in the ongoing response to Covid-19.

More than 75 per cent of adults across the UK have received their first dose, while over half of all adults have now received their second dose. With everyone aged 25 or over being offered a vaccine, the Government remains on track to meet its target of offering every adult a vaccine by the end of July.

97,958 vaccines have been administered to residents across Keighley and Ilkley to date, including 38,951 who are now fully vaccinated with both injections – giving them the maximum possible protection against the virus.

To give those most at risk the greatest protection possible, the Government is accelerating the delivery of second doses by reducing the period between the two courses from twelve weeks to eight and will launch a booster programme in the autumn - backed by 60 million doses of the Pfizer vaccine.

In just under six months since the world’s first approved vaccine, the Pfizer vaccine, was administered in the UK, Britain’s vaccination programme is already having a significant impact in reducing hospitalisations and deaths, saving more than 13,200 lives in England alone.

Thanks to efforts of the Vaccine Taskforce, we have secured more than 500 million vaccines for every nation of the UK, including over 210 million doses of the Pfizer, Oxford-Astrazenca and Moderna vaccines which are currently being deployed in the fight against the virus.

None of this could have happened without the remarkable and heroic efforts of our NHS, our key workers, our armed forces and communities and volunteers across the country, who are working together to deliver the vaccine and save lives.

Commenting, Robbie Moore said: “Thanks to the continued success of our vaccine programme, and the efforts of people across Keighley and Ilkley and around the country, we are making huge progress in emerging from this pandemic. The NHS, Government and partner organisations have done a fantastic job in rolling out the vaccine both locally and nationally. My thanks go out to all who have taken part.

“Vaccines remain our best defence against the virus, and the case for getting vaccinated has never been clearer, which is why I am encouraging everyone when they get invited forward, to get the jab.”

Commenting, Health Secretary Matt Hancock said: “I am incredibly pleased that over three quarters of UK adults have had their first dose. This is an incredible step forward in the largest and most successful vaccination programme in our history.”

“Although we’ve come so far in less than six months since the world’s first authorised jab was given in the UK, our vital work is not done. We must redouble our efforts on the second dose to ensure as many people as possible have maximum protection.”

“We’ve brought forward appointments from 12 to 8 weeks for a second dose, and all over 25s are now eligible for the jab. I encourage everyone to come forward when the offer comes and play a part in getting us back to normality.”