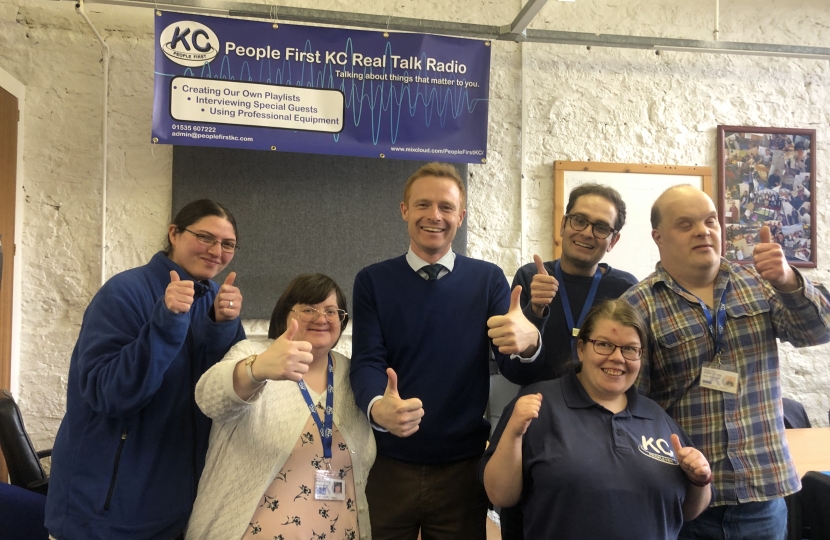 Organisations playing a leading role in levelling up across the Keighley and Ilkley constituency have been nominated by local MP Robbie Moore for an award backed by Britain’s leading businesses.

The Levelling Up Goals Awards recognise those people and organisations that are committed to boosting opportunity and helping to level up the UK in the wake of COVID-19.

MPs throughout the UK nominated organisations from their constituencies for the 14 different award categories which are focused on equality of opportunity at key life stages. Local nominees included University Academy Keighley, People First Keighley and Craven, and Keighley College amongst more nominated by Robbie Moore.

The Awards have cross-party backing from Chancellor Rishi Sunak MP and Dame Margaret Hodge MP amongst others. The Levelling Up Goals Awards are Co-Chaired by former Minister for Public Health and loneliness champion Seema Kennedy OBE and Peter Gibson, MP for Darlington.

The categories are based around the ‘Levelling Up Goals’ launched earlier this year including Successful School Years, Health and Wellbeing and Closing the Digital Divide. The Levelling Up Goals group is co-chaired by former Secretary of State for International Development, Rt Hon Justine Greening and Keighley and Ilkley MP Robbie Moore (who acts as Parliamentary Chair).

Seema Kennedy OBE said: “A huge congratulations to those nominated for these awards who  have already shown that they are playing a key role in helping their communities level up. The 2021 Levelling Up Goals Awards celebrate the great work going on in communities across the UK and the message of these awards is simple; Our country can recover from COVID-19, and it can also be a fairer country than before.”

Keighley and Ilkley MP Robbie Moore said: “Levelling up is one of the main priorities for this Government, something which I am proud to play a part in as the Parliamentary Chair of the Levelling Up Goals team. And the Keighley and Ilkley constituency plays a huge part in that.

“There are many great organisations and Individuals across the constituency who are playing a vital role in the levelling up agenda and I hope to see many of these recognised during the Levelling Up Goals Awards.”

The Levelling Up Goals Awards are sponsored by the Harrison Centre for Social Mobility, which supports organisations across the UK that work with young people to achieve their potential.

Entrepreneur and President of the Levelling Up Awards David Harrison said “MP’s can play a big role in helping to level up the UK. It is fantastic to see Robbie Moore getting involved in the awards and taking the time to recognise the great work going on locally to help boost social mobility and level up their communities.”