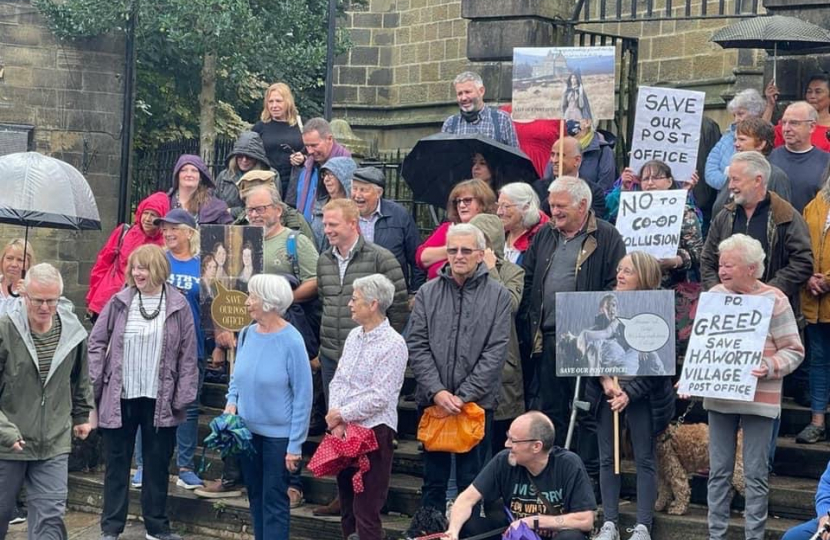 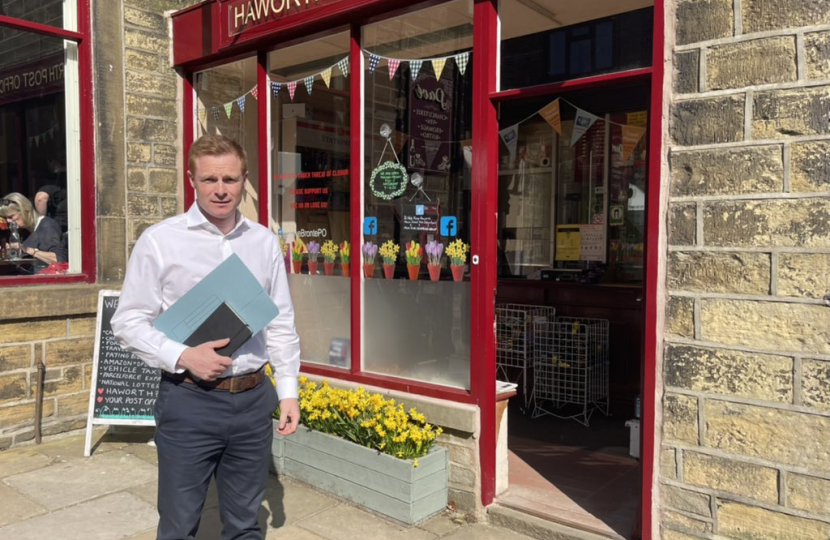 Keighley and Ilkley MP Robbie Moore has responded with anger to the news that Post Office Ltd. have set a date of 29 July for the closure of Haworth Main Street Post Office.  Moore, alongside other local campaigners, has arranged for a public meeting on the matter, and is urging as many local people as possible to attend.

Whilst Post Office Ltd has announced the closure date, Moore and local campaigners are questioning why this has been done despite a clear lack of robust engagement by the Post Office with local businesses, as well as the wider community. Post Office Ltd. initially announced its plans to close the Main Street Post Office last year, with the only remaining provision of Post Office services being a counter in the recently opened Co-op on Station Road, on the other side of Haworth. Since then, Moore has regularly met with representatives from Post Office Ltd to lobby for Haworth Main Street Post Office to remain open, and has presented a petition with nearly 7000 signatures on the subject to Parliament. However, he has been critical of the company for their refusal to engage properly with Haworth residents themselves.

As a result, Moore and local campaigners have organised a public meeting on the matter. Whilst Post Office Ltd. have declined the invitation to attend, he is urging as many residents as possible to join him at the event to ensure not only that the local community’s voice is heard but also to use the meeting to update residents on the current situation. The meeting is taking place at 7pm on Thursday 16th June, and will be held at the Old School Room on Church Street in Haworth.

Robbie Moore MP said: “The view of people in Haworth and beyond is absolutely clear; we want our much-loved Post Office at the top of Main Street to stay open. Post Office Ltd have acted in complete contempt of the community’s view, and have completely ignored local businesses and local people throughout this entire process. Even though a new Post Office counter service has opened in the Co-op on Station Road in Haworth, we need the current service at the top of the village to stay open. This is sadly another example of an important local provision facing closure, and it simply cannot happen.

We have worked extremely hard for our area to be named UK ‘District of Culture’ for 2025. As home to fantastic tourist attractions like the Brontë Parsonage Museum and the Keighley and Worth Valley Railway Haworth plays a huge role in these celebrations. If we are to truly maximise the economic benefits of this, then it is vital a strong local service provision remains. It is despicable that Post Office Ltd are determined to close the Post Office at the top of Main Street.

I have organised a meeting on this matter with other key local campaigners and I urge as many local residents as possible to join me at 7pm in the Old School Room in Haworth. It is incredibly frustrating that Post Office Ltd have already declined to attend the meeting, but we must all come together to send a clear message to them that the much-loved Post Office on Haworth Main Street must remain open.”

There are two sheltered housing communities in that part of Haworth whose residents rely on the Main Street Post Office not only for the ‘official’ services it provides, but also for the human contact and sense of community it offers.  This really is a vital part of Haworth, not just for the residents and businesses but also for the more than 250,000 visitors who come here every year. To close a Post Office which has offered a continuous service for more than 180 years and which was used by the Brontë sisters (when it was located just opposite the present premises) suggests a cultural and moral tone-deafness.  And to refuse to come to explain themselves to the people of Haworth is simply dishonourable. They should be ashamed of themselves."

The Post Office counter in the Co-op does not provide a full postal service and the closure of this full service post office will impact on residents, businesses and visitors to Haworth.  I urge Post Office Ltd to engage with the community and keep this Post Office open.”

Rebecca Yorke, Interim Director of the Brontë Society and Brontë Parsonage Museum said: “We are dismayed that despite all our objections and hard-fought campaign, Post Office Ltd still plans to close the post office on Haworth’s Main Street.  It’s a vital asset for the local residential community and the many businesses - including our own - for whom online retail sales are a significant income stream.

There has been a post office at the top of Main Street since the time of the Brontës and there is an obvious need for this service to continue in order to meet the varied and wide-ranging needs of residents, businesses and the many national and international visitors drawn to Haworth each year. We hope Post Office Ltd will listen to the counter arguments and review its plans before this essential service is lost for ever”