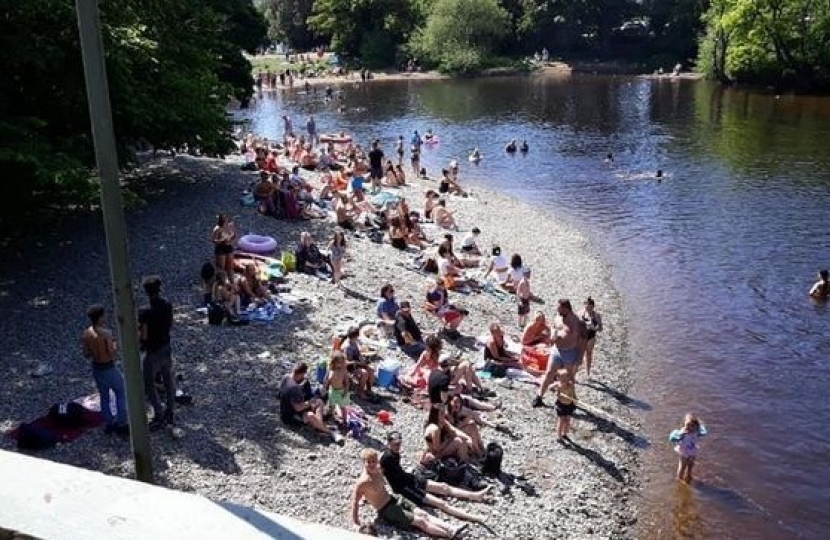 Ilkley MP Robbie Moore has spoken out against the scenes that were witnessed in Ilkley over the weekend where many people travelled to the town and gave little regard for social distancing measures, but who also left reams of rubbish behind.

Last weekend saw hundreds of people flock to Ilkley to enjoy the sunshine before further easing of the Government’s Coronavirus lockdown measures were introduced. The banks of the river Wharfe were packed with people drinking, having barbeques and playing loud music, as well as evidence of drug consumption. Very few people were seen observing 2m social distancing guidelines. The guidance over last weekend was that one member of a household could meet up with a member of another household as long as they were 2m apart and in an open space. From Monday 1 June, the Government extended this to groups of six people – still adhering to 2m apart – and can include private gardens.

Mr Moore said: “It really was frustrating to see so many people out, blatantly ignoring the latest guidance set out by the Government. It was clear that people had flocked to Ilkley to enjoy the sunshine, but to then go on and clearly disobey social distancing rules, meet in mass gatherings and leave rubbish behind was totally unacceptable. I was down at the Riverside over the weekend to see the scenes for myself and it angered me that many simply ignored the government guidance and clearly had no respect for our town. Drug taking was also clearly happening – this cannot go on.”

“I’ve received many emails about this – and rightly so. I was in contact with the Police and Bradford Council over the weekend to make them aware of the situation. Inspector Beecroft confirmed that extra police officers had been deployed to the area. Going forward, extra police officers – included mounted officers – have been requested for the coming weeks.”

“Inspector Beecroft also confirmed that he has requested extra help from Bradford Council to deal with enforcement. I too have raised this with Bradford Council’s Chief Executive, supporting the police’s request for further help. I will continue to work with West Yorkshire Police and Bradford Council to ensure that, going forward, lessons are learnt from this weekend as we cannot allow this to continue.”

“There has been so much fantastic work undertaken by many across Ilkley to help keep our community safe over recent weeks, and last weekend’s scenes, particularly at the Riverside felt like a kick in the teeth to all the hard work done to date. People should still remember to keep at least 2m apart from people outside of their household at all times. There is no excuse for people to be breaking these measures which have been put in place to protect us all.”