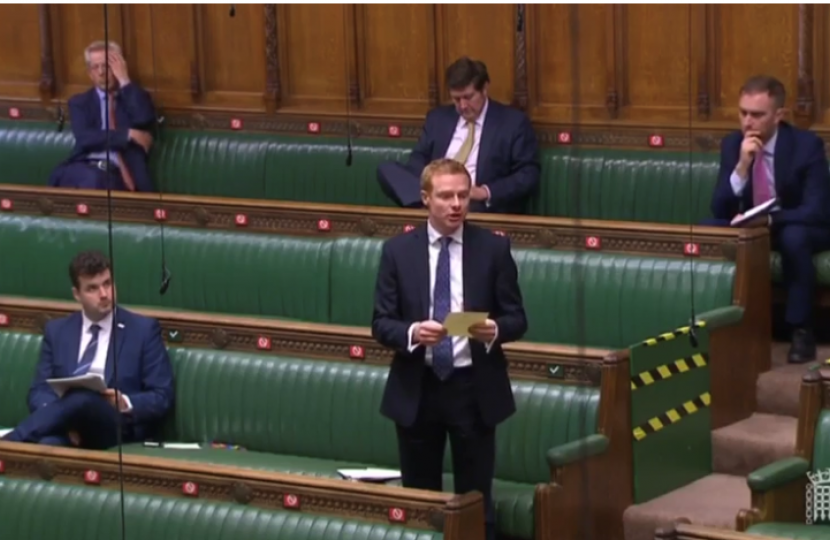 Keighley and Ilkley MP Robbie Moore has called for more action to support victims of child sexual abuse and highlighted the need to prevent the crimes from taking place. In a question to Justice Ministers, he highlighted the experiences of over 18,700 children identified by local authorities as victims of sexual exploitation in one year alone.

Robbie called for ‘joined up support’ from the police, the NHS and children’s services to help victims recover and he said more needed to be done to prevent the ‘gut-wrenching’ crimes from taking place in the future.

Back in 2015 twelve men from Keighley were convicted of committing sexual offences against two underage girls in what became a national story of young girls being groomed by gangs of men to carry out sex acts. Earlier this year, twenty-seven people from across the whole Bradford district, including Keighley were arrested as part of an operation tackling online child sexual exploitation.

Robbie recently raised the problem of drug dealing taking place openly on the streets of his constituency with the Prime Minister. In the weeks after his question at PMQs residents contacted Robbie’s office to highlight their concerns regarding ongoing drug gang related issues and that of child exploitation by such gangs. Robbie is determined to crack down on this issue and will continue to press the case on this. He is calling for more joined up working to help keep people safe from abusers in his constituency.

Questioning the Justice Minister in the House of Commons, Robbie asked:

“Previous figures published by the Department for Education have shown that more than 18,700 suspected victims of child sexual exploitation were identified by local authorities in 2018-19. Several grooming cases brought to court have revealed abusers are targeting vulnerable girls, particularly those in care or supported accommodation, or with learning difficulties – It is gut wrenching to hear, but the reality is that this still happening today.

“Can my Right Honourable Friend confirm that he is dedicated to forming a ‘joined up support approach’ with police forces, local NHS services and children’s services to identify, support and protect these victims, but also with the aim of preventing such abuse?”

In his response, the Justice Minister said:

“Child sexual abuse and exploitation are truly abhorrent, and the government is dedicated to taking precisely the joined up action that he urges upon us to prevent abuse and provide support to victims.

“The Government’s Victims Strategy outlines our commitment to improved support for victims of child sexual abuse to help them cope.

“The Children and Social Work Act 2017 introduced the most significant reforms in a generation, requiring local authorities, clinical commissioning groups and the police to form multi-agency safeguarding partnerships.”

In April, the government we launched a £1.2 million fund for national services supporting survivors of child sexual abuse alongside a £2.8 million transformation fund to promote and embed best practice in child sexual abuse victim support.