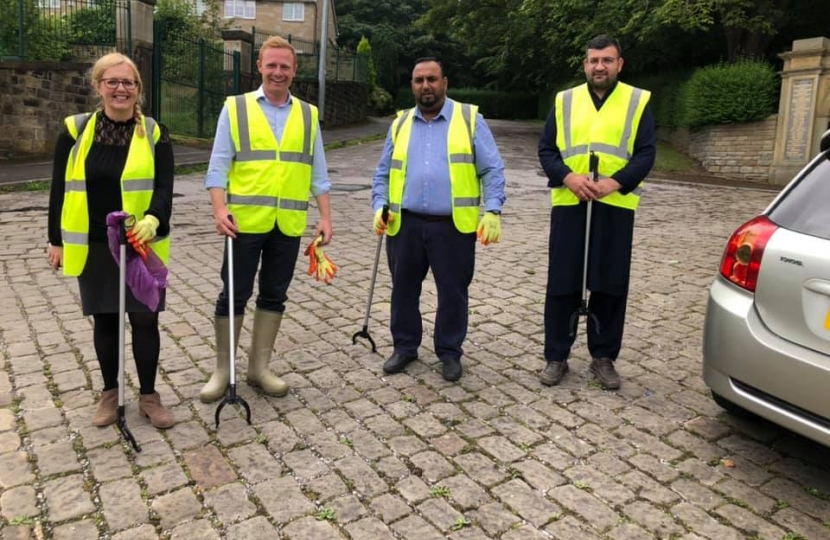 The litter pick focused on Devonshire Park which has been raised by a number of constituents as an area of concern due to the amount of rubbish which is dumped there. In total, six full bags of rubbish were collected by the team.

Robbie Moore leads litter picks on a regular basis around the Keighley and Ilkley constituency with a growing number of dedicated local volunteers. Litter picks have also been held at Cliffe Castle, Haworth, Cross Roads, Ilkley and North Street in Keighley amongst other places.

Commenting Robbie said: “I am thankful to the volunteers that helped me this month with my regular litter pick. Doing small things like this really do go along way in making our area a better place to live.

“It is disappointing to see so much rubbish littering our beautiful parks and streets. It cannot be stressed enough that taking your rubbish home or using one of the council bins provided will go along way in cleaning up our area.”

Commenting local councillor Mohammed Nazam said: “It is important that we take care of our parks and make sure they are clean and debris free for the residents. I would like to thank the MP Robbie Moore for taking an active approach and leading the way by organising regular litter picks and hope other residents can join in future litter picks.”

If you are keen to help out with one of Robbie Moore’s litter picks or want to make him aware of any areas which could do with an organised litter pick, please contact his office on robbie.moore.mp@parliament.uk or telephone 01535 600538.