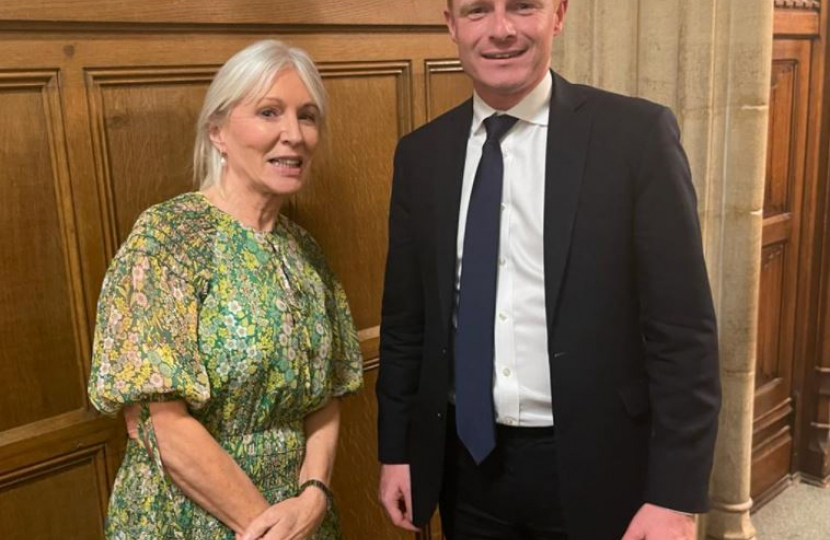 Keighley and Ilkley MP Robbie Moore has met with Culture Secretary Nadine Dorries to continue his lobbying for her department to select the whole of the Bradford District to be ‘District of Culture’ in 2025.

The Bradford District is one of four areas to have been shortlisted to win the title of City of Culture in 2025. With a decision expected later this month, Moore has been working hard in Westminster to do all he can to ensure Keighley, Ilkley, the Worth Valley and the rest of the Bradford District gets this title, which brings huge amount of national funding. He has met with Culture Secretary Nadine Dorries, as well as Arts Minister Lord Parkinson, on several occasions to discuss the bid, and with a decision expected so soon, Moore made sure to meet with Dorries ahead of the final decision.

Moore has previously expressed his support for the local area to be named District of Culture for 2025, citing the fantastic cultural offering his constituency has to offer, including tourist attractions like the Ilkley Toy Museum, Bronte Parsonage Museum and the Keighley and Worth Valley Railway.

Robbie Moore MP said: “It is vital for our local area to be recognised at a national level. It is very important for the growth of our local economy that that we try and achieve as much funding and recognition as possible. These were the points which I put to the Culture Secretary Nadine Dorries again as I set out the case for why our area should be crowned the District of Culture in 2025. With a decision coming soon, I am making sure to do all I can in Westminster as one final push for our bid.

We have such a rich cultural offering and Yorkshire’s finest tourist attractions in Keighley and Ilkley. I made this clear to the Culture Secretary, and let her know that we stand ready to showcase this offering to the rest of the country.

Previous cities of culture have seen such a boost for their local economies, through investment and the creation of jobs. This is exactly what I want to see for Keighley and Ilkley, and I will keep making the case for this to ensure our bid is successful.”