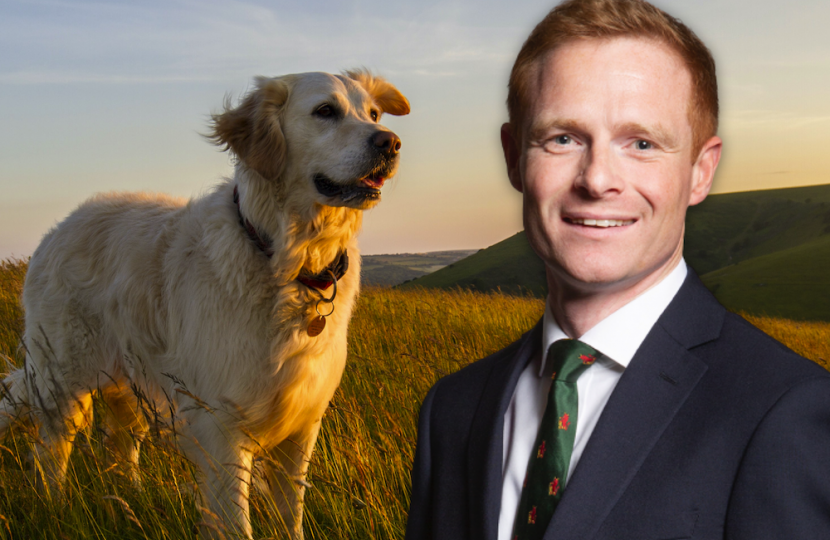 Robbie Moore, MP for Keighley and Ilkley has welcomed news of a government crackdown on criminals who steal pets.

Theft of a pet is currently treated as loss of an owner's property, meaning thieves can get a harsher sentence for stealing a bike, than stealing a beloved family pet. The new law will recognise the welfare of animals, and are part of a string of recommendations to from the government’s Pet Theft Taskforce, which was set up to tackle a rise in thefts throughout lockdown.

Local MP Robbie Moore has long campaigned for better protection for animals, including supporting the Animal Welfare Sentencing Bill in Parliament last year, which increases the maximum sentence for the worst abusers of animals from 6 months to 5 years. The MP backed the Bill after hearing of an American Bulldog in Keighley called Smiler, who was found by the RSPCA barely conscious, having had domestic cleaning products used on her.

The Taskforce’s recommendations include:

Robbie Moore, MP for Keighley and Ilkley said “Pets are beloved members of the family, and callous criminals who steal them to line their pockets should face harsh consequences.

I will be giving this new offence my full backing in the House of Commons, so the police have the tools they need to bring these sickening individuals to justice.”

Robert Buckland QC MP, Secretary of State for Justice said“Many of us have sought the companionship of pets during the pandemic which makes this crime even more cruel.

These proposals will make sure police can better identify and track down criminals who peddle in this heartless trade, whilst ensuring they are appropriately punished for their actions.”

The new Pet Abduction Offence will acknowledge the seriousness of this crime and we hope this will encourage courts to hand out much tougher sentences to pet thieves.”

The MP has also welcomed government plans for the UK to become a global leader in animal welfare standards, which include new measures to crack down on the illegal smuggling of imported dogs and puppies.

2,000 dog theft crimes were reported to police in 2020, causing huge distress for owners and their pets alike. The price for the UK’s five most desirable dog breeds grew significantly during the first lockdown, with some rising by as much as 89% - potentially making dog theft more appealing to criminals seeking to profit.