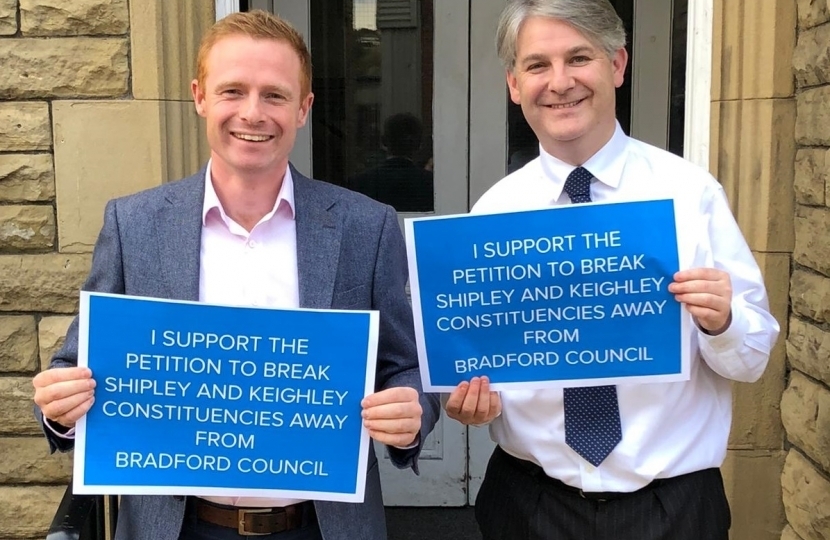 Listening to many residents from across our Keighley and Ilkley Constituency, it is clear that there is a real underlying frustration with Bradford Council.

For many years, Bradford Council have been consistently prioritising their spending within their city centre heartlands at the expense of the outlying areas, and they are treating Keighley, Ilkley and Craven like their cash cow. Speaking with residents from across the constituency, people are getting fed up seeing ‘bad’ Bradford decision making having a detrimental impact on their area.

Only recently, we have seen the Tourist Information Centre close in Haworth, but yet the equivalent remain open in Bradford City Centre despite Haworth receiving 18,000 more visitors per annum. Ilkley residents and local businesses are now exposed to a badly thought through parking scheme. Silsden is bearing the brunt of new additional housing, with no expenditure on local infrastructure, and Keighley feels forgotten as Bradford Council prioritises spending within Bradford city centre.

I have pledged my support to neighbouring Shipley MP, Philip Davies’ growing campaign for the Shipley Constituency and the Keighley and Ilkley Constituency areas to split from Bradford Council and form our own local authority.

The strength of feeling is strong and residents are informing me that they want a better deal from both their council tax and those who make local decisions on their behalf. That’s why I am fully in support of backing a campaign which explores the possibility of spitting Keighley, Ilkley, Craven and the Worth Valley away from Bradford alongside our neighbouring Shipley Consistency. We want a referendum across the two parliamentary constituencies of Shipley and Keighley to gauge support for the move, which would see a new council formed similar in size to Calderdale.

Neighbouring Shipley MP, Mr Davies said: “Too many times we have missed out to the Labour heartlands and I want an end to it, money has been given to city centre projects or businesses and the Shipley constituency is sidelined.

Both I and Mr Davies want money invested in our areas and believe forming a separate council is the way forward. The money raised through council tax would be spent in our area by people who know the area and not siphoned off to Bradford. It would also mean local planning decisions would be taken by local councillors instead of by Bradford which would protect our greenbelt, which Bradford Council has been concreting over for too long. A separate council would end the focus being solely on Bradford town centre schemes, projects or businesses.

We now need to show the Secretary of State the weight of support, and therefore if you are in agreement with exploring the possibility of our Keighley and Ilkley Constituency splitting away from Bradford alongside our neighbouring Shipley Constituency, I would urge you to sign the petition by clicking on this link; https://www.robbiemoore.org.uk/leave-bradford-metropolitan-district-council

The Chancellor has announced a much-needed boost for tourism and hospitality businesses in Keighley and Ilkley, as part of his Summer Economic Update to kickstart the economy post-coronavirus.