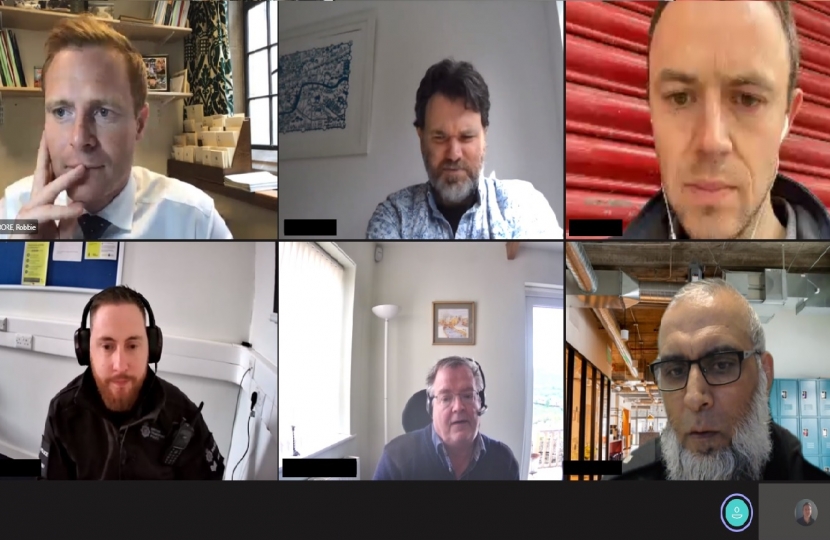 Following the recent spate of railway trespassing on the Keighley Worth Valley Railway line, local MP Robbie Moore holds meeting with key stakeholders to help raise awareness of the dangers of walking on railway lines.

The meeting was instigated by local MP Robbie Moore following a number of reports of people trespassing on the heritage railway line despite a regular service running on the line. The story made national news when a picture was taken of a family with a push chair walking down the railway line.

The meeting, which took place on 25 May, was hosted by Robbie Moore and involved Nick Bennett and Noel Hartley from Keighley Worth Valley Railway, Inspector Khalid Khan of West Yorkshire Police, Sergeant Martin Peters from the British Transport Police, and James Blanchard from Network Rail.

As the Keighley Worth Valley Railway line is a privately owned heritage railway line, the British Transport Police or Network Rail do not have authority over this line. However the two organisations were keen to attend the meeting and get involved so that a joint up effort could be made to raise awareness of the dangers of trespassing on railway tracks, regardless of whether they are publically or privately owned.

Commenting Robbie Moore said: “I am grateful to all who attended the meeting. It was a very proactive meeting and has provided reassurance that with a joint up effort across the board, key stakeholders are eager to raise awareness of the dangers of trespassing on railway lines – heritage or not. It cannot be said enough: walking on railway lines is dangerous.

“Network Rail have agreed to launch an outreach programme in local schools across the Keighley and Ilkley constituency highlighting the dangers of trespassing on railway lines. I will be supporting Network Rail with this initiative to promote it to as many schools as possible.”