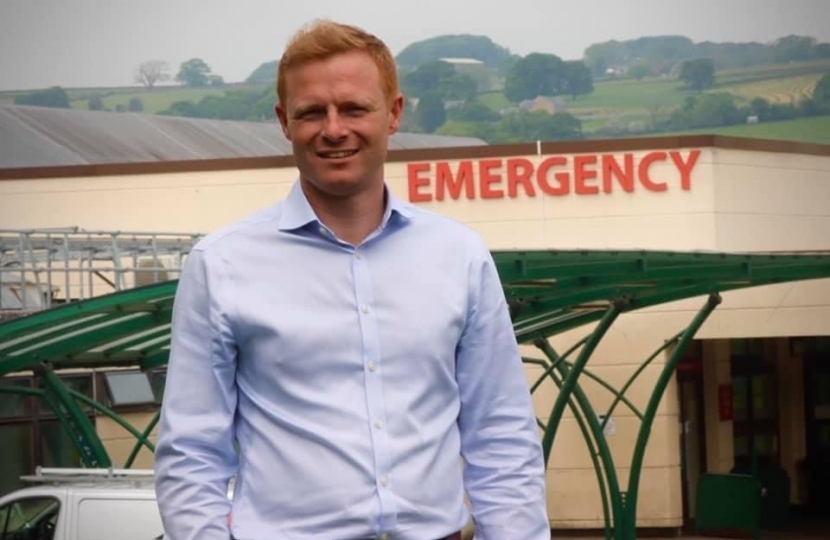 Keighley and Ilkley MP Robbie Moore has spoken of his determination to secure a full rebuild of the Airedale Hospital, following the submission of plans for the rebuild to the government.

The new hospital will be the first to be carbon-neutral in Europe, and replace the existing building.  Airedale has been rated as one of Yorkshire’s best hospitals, with 97% of patients likely, or extremely likely to recommend Airedale’s Services. Despite this, the hospital building is now more than 50 years old, despite being built with a lifespan of just 30 years. 83% of the building is also made from aerated concrete, known for its structural deficiencies.

Securing a rebuild of Airedale has been a priority for the local MP since being elected, and earlier this year, Mr. Moore secured a debate in the House of Commons on the topic. Neighbouring MP’s Phillip Davies (Shipley), Julian Smith (Skipton and Ripon) and Andrew Stephenson (Pendle) have also backed the MP’s campaign for a new hospital.

Last year, Mr. Moore secured £1.7m from the government for vital maintenance work at Airedale Hospital, and to expand A&E capacity. Earlier this year, the MP also secured funding for a brand new Health and Wellbeing Hub in Keighley Town Centre, which will bring together a full range of medical professionals, including GPs, self-care and prevention specialists along with community care and mental health teams.

Robbie Moore MP said “Levelling Up means delivering better healthcare. The Airedale has amazing staff, but they need a new hospital to match their outstanding service. That’s why I’m campaigning for a full rebuild of the Airedale Hospital.

I am delighted with the plans put together by Airedale’s Chief Executive, Brendan Brown, and I’m continuing to lobby the Health Secretary Sajid Javid hard in Westminster to make sure we deliver the new hospital that we all want to see. I’ll always fight for the very best for our community.”

The local MP is asking residents to back his campaign for a new hospital to send a loud and clear message to the government that the plans have the support of the people of Keighley and Ilkley. Local people can back the campaign by visiting robbiemoore.org.uk/AiredaleHospital.

A statement on the killing of Sir David Amess

Sir David Amess’ murder is a senseless tragedy. He was an exceptionally kind, wonderful man, and was incredibly dedicated to his constituents in Southend.