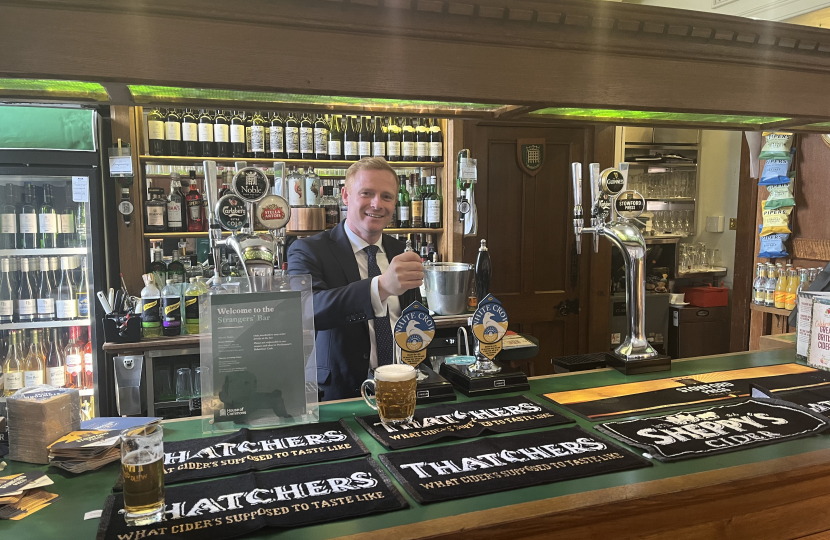 Keighley and Ilkley MP Robbie Moore has pulled the first pint of a locally brewed beer in Parliament, which is being produced to help raise funds for Ukrainian refugees.

‘White Crow’ by Bridgehouse Brewery, located in Keighley, is this week’s guest beer in the Houses of Parliament, with all profits from the beer being donated to the #HelpUkraine Emergency Appeal.

Bridgehouse Brewery Manager James Kelly said: “We were greatly disturbed by the events in Ukraine which struck a chord with everyone at the brewery.

We therefore decided to do what we do best and get brewing to support those in need and launched a special one-off blonde ale to raise funds for the Help Ukraine appeal.”

The brewery has been working with the Brew For Ukraine initiative which has more than six hundred breweries signed up worldwide including over seventy in the UK. Each supportive brewery is producing original Ukrainian recipes or Ukrainian themed beer to raise money to support the relief effort with over $1 million raised so far.

Moore met with Brew for Ukraine representative Steve Davsion at the event, and thanked him for his work to support Ukrainian refugees before becoming one of the first people to sample the latest beer to be produced in his constituency.

Robbie Moore MP said: “We have some fantastic independent breweries in Keighley and Ilkley, and it has been great to see some of their responses to raise much needed funds for Ukrainian refugees through the Brew for Ukraine campaign.

It was a privilege to pour one of the first pints of White Crow in Parliament and I will be encouraging all my colleagues to offer their support by sampling Bridgehouse Brewery’s beer this week. This is a great way of getting their campaign recognised at a national level.”