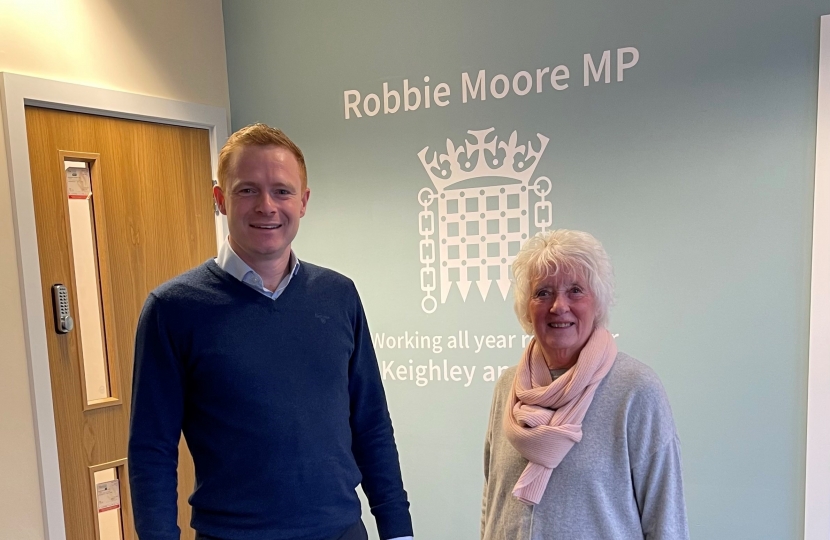 Local resident Christine Sharp, a member of The Royal Osteoporosis Society, has met with her MP Robbie Moore to lobby him directly on what further support can be given to the charity and those who suffer from the disease. Sharp has volunteered for The Royal Osteoporosis Society for over ten years, and travels all over the country to raise awareness of the condition. This has included two visits to Parliament to lobby MPs directly.

Osteoporosis is a condition which weakens bones, making them more vulnerable to breaks. As it develops slowly over several years, it is only diagnosed after a fracture due to a fall or sudden impact. It can be a debilitating and difficult decision to live with, which affects around 3.5 million people in the United Kingdom. Despite this, it is often described as a “silent disease”, due to there being no symptoms until after a fracture has occurred.

Campaigners, including those from The Royal Osteoporosis Society, have worked hard to correct the under-acknowledgement of Osteoporosis in Public Health. There are now 95 fracture liaison services across England and Wales, which play a key role in the fight against Osteoporosis. The Government and NHS England have however expressed their aspirations to expand these services; acknowledgement of the hard work by campaigners such as Christine Sharp.

Robbie Moore MP said: “Meeting with constituents is the best part of my job. I was really interested to hear from Christine about her experiences, as well as what more we can do to help those who suffer from Osteoporosis.

What is clear is that in spite of the severity of this disease, there has not been enough recognition of this. This has got to change, and I will be making the case in Westminster that we need to be doing more to improve the future for people with Osteoporosis. I believe more diagnosis will be key to this, and it is vital for us to support local health commissioners in doing this.”

Christine Sharp said: “We need desperately to stop the postcode lottery regarding Fracture Liaison Services. The service needs to be available to everyone over the age of 50 who breaks a bone due to Osteoporosis, in order for them to be treated appropriately to help prevent further fractures.