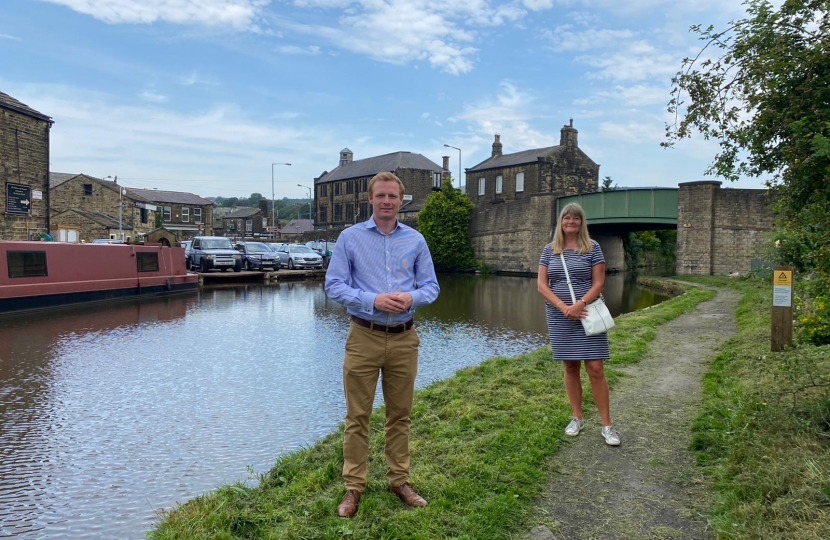 A towpath that passes along the canal from Silsden to the West Yorkshire boundary will benefit from £500,000 of investment, under the Government’s Getting Building Fund. The cash will enable the completion of improvement works on the towpath that is part of the Leeds Liverpool Canal route.

The £900 million fund was announced by Prime Minister Boris Johnson in June as part of the Conservative Government’s New Deal for Britain.

It’s an ambitious economic strategy to rebuild the country after coronavirus, by putting skills and infrastructure investment at the heart of our economic recovery.

More than 300 projects, which have been determined as ‘shovel-ready, have been allocated a share of the fund. In total, the investment is expected to deliver up to 45,000 homes, create up to 85,000 jobs and reduce around 65 million kilograms of carbon dioxide emissions across England.

The towpath upgrade from Silsden to the edge of West Yorkshire will benefit walkers and cyclists. Improving the condition of the path has been a long-running campaign of local councillor Rebecca Whitaker and is backed by the MP for the constituency, Robbie Moore.

It builds on the commitments made by Boris Johnson and the Conservatives during last year’s General Election to level up the whole country, investing in infrastructure and communities across the whole country. The Prime Minister’s New Deal accelerated more than £5 billion of investment on infrastructure projects, including the Getting Building Fund, while the Chancellor has also recently set out a Plan for Jobs, to support people in the wake of the coronavirus outbreak.

“Levelling up between northern and southern parts of England was a key pledge during the 2019 General Election campaign. I’m really pleased that despite the challenges coronavirus has thrown at us we’re still able to deliver on these projects which will improve the local area, boost the economy and create more jobs.

“Through important funds such as this, we can future proof our towns with better, greener infrastructure, while also supporting jobs over the months and years ahead. This project will be great for improving pedestrian and cycling connectivity for our area, and will help pull visitors into Silsden."

"I am very pleased to see Government funding has been given for completing the upgrade on the canal towpath between Silsden and Kildwick. This is something I have supported and advocated during my work on Bradford Council. I am glad that WYCA has finally agreed to complete this part of the towpath which is long overdue. It is a historical transport link and is part of Silsden's local heritage When it is finished it will make it easier for walkers to negotiate the towpath especially for those with disabilities and families with little ones in prams. It will of course make a smoother and faster ride for those on cycles so I hope consideration will be shown by different users towards one another.

“The upgrade of the canal towpath between Riddlesden and Silsden in 2018 has made a huge difference already to the amount of people who use the canal and I look forward to the 'missing link' being completed as soon as possible."

“As we get Britain building we are also laying the foundations for a green economic recovery by investing in vital infrastructure for local communities, creating jobs and building environmentally-friendly homes with a huge £1.3 billion investment announced today.

“This Government is determined to level up all parts of the country and this funding will not only give a much-needed boost to our economic recovery, it will help build the good quality, affordable homes the country needs.”

Stay in touch with more good news like this!