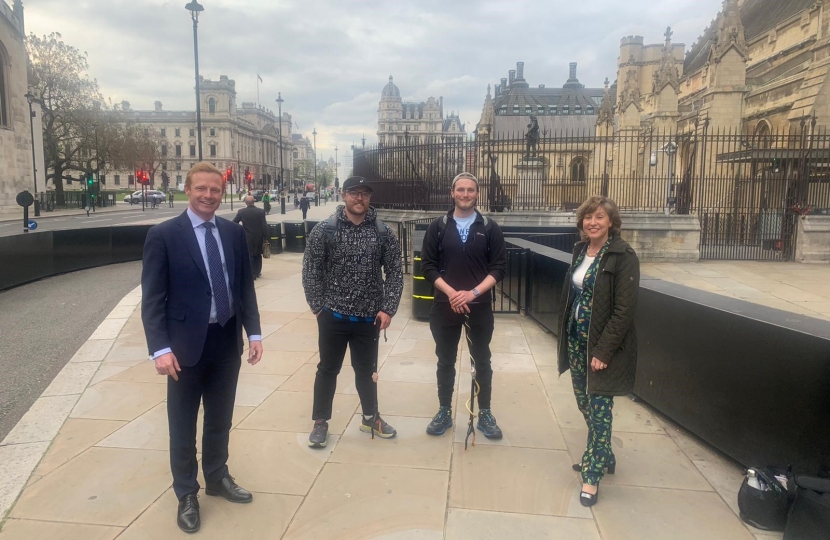 Ilkley-based duo Patrick Godden and Jack Hanson - the Wharfe Walkers - were greeted outside Parliament by Environment Minister Rebecca Pow and Keighley and Ilkley MP Robbie Moore on 26 May as they finished their 265 mile walk from the source of the River Wharfe in Yorkshire all the way to London.

The pair travelled mostly along Britain’s waterways to reach London, collecting hundreds of kilos of litter from the riverbanks to raise awareness of cleaning up our waterways. They have also raised thousands of pounds for the Ilkley Clean River group.

Commenting Patrick Godden said: "Like most rivers in the UK, it is heavily polluted, not just with litter but by the raw sewage discharged by treatment plants. As local lads who grew up with the Wharfe as a backdrop to so many good times, when we realised the extent of the problem, we knew we had to get involved.

"The Wharfe isn’t the only UK river suffering from these issues. Having walked the length of the Wharfe, we wanted to raise awareness across the country, so we carried on to London via waterways like the Ouse, Trent, Thames and the Grand Union Canal, and lakes and reservoirs like Rutland Water, collecting waste as we went."

Commenting Jack Hanson said: "The amount of rubbish we collected was staggering. It was a hard slog at times but our spirits were always lifted by the warmth and generosity of the people we met along the way, like the café owners in East Yorkshire who set us up for the day with a free breakfast and the pub customers in Lincolnshire who had a whip-round for us."

Commenting Keighley and Ilkley MP Robbie Moore said: “I am very proud of the fantastic effort that Patrick and Jack have gone to raise awareness of Britain’s rivers and waterways. I was amazed but saddened with the amount of rubbish that the pair collected over their journey down to London. I am pleased however that Patrick and Jack got the opportunity to raise their concerns directly with the Environment Minister, Rebecca Pow as they finished their walk. I look forward to seeing the money that they have raised make a positive impact on our waterways.”

Donations can be made here: https://www.justgiving.com/crowdfunding/wharfe-walkers