Why I will be voting for today's Brexit Trade Deal 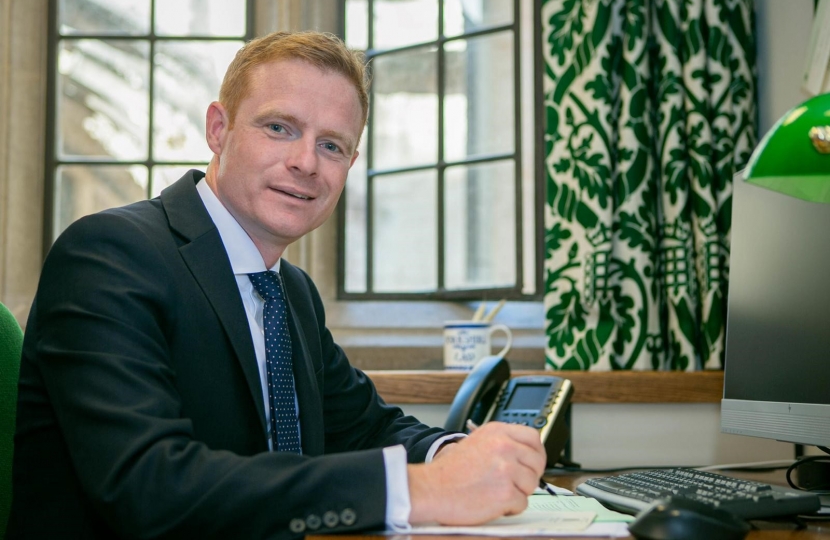 Today, I’ll be voting on the Trade Deal the Prime Minister has secured with the European Union. I very much hoped to speak in today's debate on the deal, but hundreds of other MP's did too. Sadly, I wasn't selected to speak, so I wanted to set out my thoughts to you directly.

2020 is a year none of us will forget, but as it ends, we leave with an opportunity to show what a truly global Britain can achieve.

In the EU referendum in 2016, we all had our own reasons for voting the way we did. It was a referendum that divided families, friends, and communities.

When I was elected as your MP last year, I promised to vote to get Brexit done – and we left the EU on 31st January 2020. Throughout this year, the government has been negotiating a trade deal with the European Union to secure our future relationship.

These negotiations have been tough and intense. The government was always clear that it would not agree to a deal at any cost. It had to be the right one.

But on Christmas Eve, the Prime Minister announced the government has agreed a trade deal with the European Union. Having studied the deal over recent days, I think it is the right one for Keighley and Ilkley, and the United Kingdom as a whole.

More than four years on since Britain voted to leave, we have a deal that delivers on what people voted for, whilst maintaining our economic and trading relationship with our friends and neighbours in the European Union.

The deal achieves the objectives set out by the government. We will fully regain control over our laws, borders and fishing waters. It contains a broad Free Trade Agreement, alongside cooperation on security and nuclear matters.

It is the biggest bilateral trade agreement that has ever been signed, worth over £660 billion.

There will be no role for the European Court of Justice, and no requirement to follow EU law.

We have agreed streamlined co-operation on law enforcement, ensuring that we continue to effectively tackle serious organised crime and counter terrorism.

And, as promised, we will continue to maintain the highest labour, environmental and climate standards.

There will be no tariffs or quotas, meaning individuals, families and businesses will be able to continue to trade freely and smoothly with the EU. And if our industries need it, we will be able to give them additional support as we will be exempt from European State Aid rules.

The deal delivers for the entire UK, protecting the integrity of our internal markets and Northern Ireland’s place within it.

Fish featured heavily in the Brexit negotiations and I am very pleased that this deal regains control of our waters. We have a five-year transition period in place, which enables us time to rebuild our fishing fleet and develop our fishing industry to meet demand, overturning the inequality that British fisherman have faced for over four decades.

The deal provides for the UK’s participation in certain training and research programmes, furthering our commitment to making the UK a science and research superpower. We will still be participating in the Horizon Europe programme, the Euratom Research and Training programme and the space programme, Copernicus.

And in terms of travel, the deal includes arrangements which give people the ability to travel to and from the EU easily for work and holidays. The deal also includes a social security agreement that has practical benefits for UK citizens including accessing healthcare when traveling to the EU.

Many constituents have been in touch asking me to back this deal.

That is exactly what I will be doing.

The alternative to this deal, would be a no deal. Whilst I have always said Britain could thrive without a deal, this would undoubtedly have caused further disruption that businesses do not need – especially as we fight the Coronavirus pandemic.

That is why I have been so surprised to see the approach of other parties in the House of Commons.

The SNP, Green Party, and many Labour MP’s are also voting against the deal. Given that each of these parties campaigned against a No Deal scenario, I find this position odd – and I know many people feel the same.

However, many of the emails I have received in recent days have raised concerns about the future of the Erasmus+ scheme.

I have been told by some constituents that young people will be deprived of the chance to study abroad. I want to reassure people that this is not the case. The Erasmus+ scheme will be replaced by a new, more effective £100 million Turing Scheme.  Our exchange programmes should not be limited to Europe. The fastest, most vibrant and dynamic economies are increasingly found in Africa and Asia. The Turing scheme will fund around 35,000 students in universities, colleges and schools to go on placements and exchanges, and will specifically target students from disadvantaged backgrounds and areas where few students have previously benefited from Erasmus+. Students who are already studying abroad via Erasmus will be unaffected under the Withdrawal Agreement already negotiated with the European Union.

No matter what side you were on in the referendum, we all know that Brexit has been a divisive issue. By voting for this Trade Deal we can finally put the issue behind us and focus on the things that really matter.

There is much to do, and I am determined to crack on and ensure that our area flourishes– particularly as we recover from the coronavirus pandemic.

With a good trade deal in place and with Brexit done – we can finally get back to delivering on the infrastructure and investment we all want to see – and I am very excited about that. So with continued energy, enthusiasm and commitment, I am very optimistic about our future ahead.

Keighley and Ilkley MP Robbie Moore has called on the Government to push for a UN-led investigation into the allegations of genocide by the Indian Government in the Kashmir region.