Celebrating Volunteers - The View from Westminster 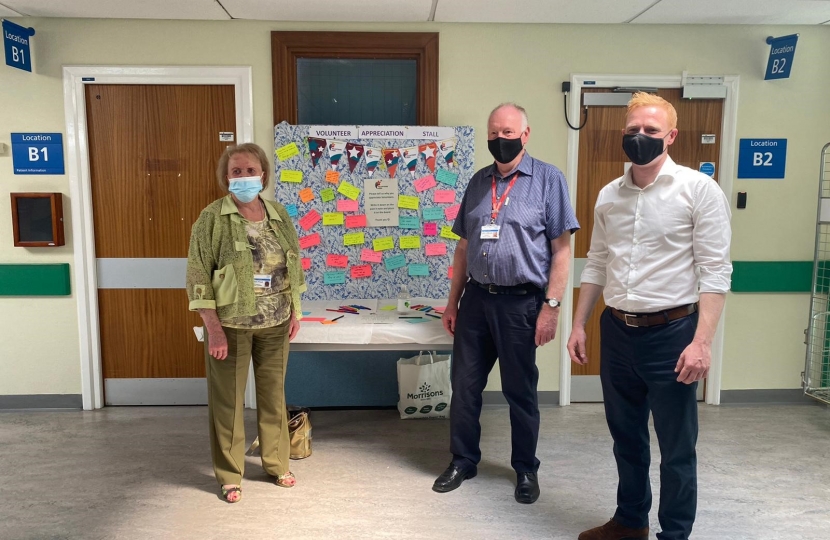 This week marks the start of Volunteering Week, a week where the nation gets together to celebrate the wonder of volunteering which so many people up and down the UK do day in day out – out of the goodness of their hearts. This year’s celebrations will be more compelling than ever after we have seen a nation get together and volunteering numbers explode during the Covid pandemic.

Since being elected as your MP I have had the pleasure of meeting many fantastic volunteer groups up and down the Keighley and Ilkley constituency, from the Aire Valley Against Incineration campaign group to Keighley Dementia Friendly who were both one of my first official meetings as your MP.

In honour of Volunteering week, I will be meeting with Friends of Airedale who raise hundreds of thousands of pounds per year to support Airedale General Hospital, whether that is funding the staff costs of the Hospital’s Voluntary Services Department, funding equipment and services to the Airedale NHS Foundation Trust or providing funding for patient transport services, Clothes for Dignity and the hospital Wifi. The team and their army of 350 volunteers are there to help the hospital, its staff and the many patients who go through the hospital’s doors on a daily basis.

Another group of volunteers who I have been in constant communication with since my election is the Ilkley Clean River group. This group has been run by a number of hard working and dedicated volunteers for a number of years with the aim of cleaning up the River Wharf. Their countless hours of unpaid volunteer work is paying off by securing the UK’s first ever designated Bathing Water Status for a river. This status is the first but crucial hurdle in cleaning up the River Wharf and putting the onus back on the water companies to ensure that investment is made in water treatment plants to stop untreated sewage discharges from polluting our waterways. Particular praise must be given to Professor Becky Malby and Professor Rick Battarbee and the entire team who lead this fantastic organisation.

Over the last year, I have also done volunteering of my own. I recently set up a litter picking group which tours around the Keighley and Ilkley constituency with a band of dedicated volunteers. So far we have focused on areas in Keighley Central including the old Keighley College site on North Street, Cliffe Castle and Cavendish Street, as well as branching out to other areas including Guard House, Cross Roads, Oakworth and Ilkley. Later this week I will be joining the Friends of Ilkley Riverside Parks at the kind invitation of Ilkley Grammar School student George Buckley on a litter pick, as well as litter picking around the Showfield area of Keighley with Cllr Naz Mohammed.

Finally, if you want to volunteer in our local community, I would urge you to get in contact with the excellent Action Point Community Support Services (formerly Keighley & District Volunteer Centre) run by the inspiring Diane Dale: https://keighleyvc.co.uk/index