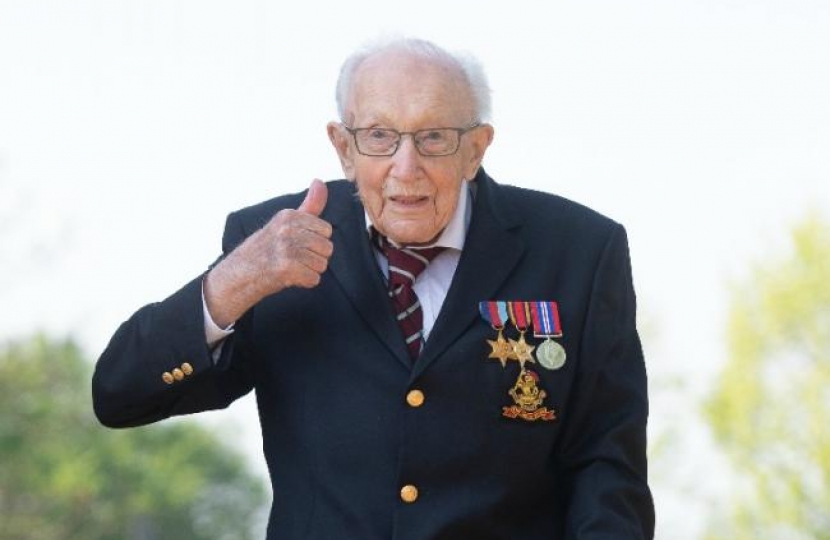 Keighley and Ilkley MP Robbie Moore has set up a commission in Keighley to honour the late Keighley-born hero Captain Sir Tom Moore who awed the nation with his fundraising efforts for the NHS during the Coronavirus pandemic. Captain Sir Tom, who recently died after a short battle with  Coronavirus and pneumonia, raised over £32m for NHS charities.

The commission has been set up by local MP Robbie Moore to decide how best to honour one of Keighley’s most treasured and beloved heroes. Members of the public will be invited to make suggestions about how the Town should honour Captain Sir Tom’s legacy.

Whilst Robbie will chair the commission, a number of local community leaders including civic figures, leader from education and health, as well as a member of the public and the Armed Forces, have been invited to join the commission.

Earlier this year Captain Sir Tom Moore was made an Honorary Freeman of Keighley at which a plaque was unveiled in his honour by the War Memorial at Town Hall Square.

Commenting, Robbie Moore said: “Captain Sir Tom Moore was an inspiration to us all. During the dark days of the pandemic, he brought a glimmer of hope to all and inspired a whole nation. His efforts and achievements in his final year have been captured all over the world.

“It would be a fitting tribute if his birth town could honour this local hero with a long-lasting memorial. I have already received lots of suggestions from members of the public as well as businesses. That is why I am setting up this commission so Keighley can decide how best to pay tribute to Captain Sir Tom Moore.”

Following approval from the commission, members of the public will be invited to make suggestions about what form the memorial should take.