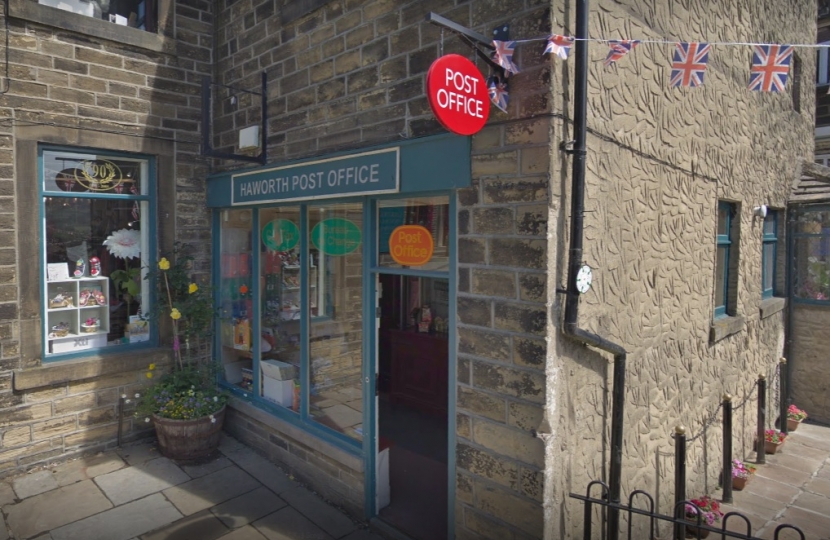 Keighley and Ilkley MP Robbie Moore has started a campaign to save Haworth Post Office in the heart of the village which has been earmarked for closure by Post Office Limited. The service will be move to the newly build Co-op on Station Road which could lead to a redaction in services that the Post Office can provide.

The current Postmaster, Sammy Ahmed, who was brought in on a temporary contract to run the service almost three years ago, has been given notice that it will close on 26 August. A consultation has been launched by Post Office Limited to encourage local residents to make their views heard. However, Robbie argues that an initial consultation should have taken place before the decision was made to close the service.

On hearing the news that the Post Office will close, Robbie wrote directly to the Chief Executive of Post Office Limited, Mr Nick Read, stressing how this Post Office is a lifeline for both the community and the many tourists on which much of Haworth economy relies, as well as inviting Mr Read to visit the Post Office for himself.

Robbie also took the opportunity to raise this campaign in the House of Commons Chamber during the Housing, Communities and Local Government oral questions, resulting in Robbie securing a meeting with the Minister for Regional Growth and Local Government, Luke Hall MP, and a Business Minister. Mr Hall, who agreed with Robbie’s concerns also pledged to raise the closure of Haworth Post Office with Post Office Limited

Commenting, Robbie Moore said: “Haworth Post Office provides a vital service for local residents and tourists and must remain where it is. I am deeply concerned to hear that Mr Ahmed has been served notice by the Post Office to cease trading. It is clear this has all been done without any prior consultation, as the Post Office only proceeded to launch their consultation after I had made contact with them expressing my dismay at the situation.

“The Post Office’s intention to relocate their services to the new Co-op on Station Road is clear – but their actions all seem like a shoddy back room deal in which they are now having to back track to ensure due process is followed. I have written to the CEO of the Post Office further expressing my concern and have taken this matter up with Ministers in Westminster.”

The Post Office consultation is now live and runs until 27 August 2021. You can respond to the consultation on the below details. Please remember to quote Haworth BD22 8DP – 301306.